It didn’t take long after Universal Studios Florida’s 1990 opening for the Orlando park to carve out an enviable spot among U.S. theme parks.

Beginning with its first full year of operation in 1991, Universal consistently recorded the highest attendance of any non-Disney theme park in the U.S. With its opening day disaster long forgotten, a new Jaws ride in operation by 1993 and additions like Back to the Future: The Ride, the park’s “Ride the Movies” motif of high-tech, often high-thrill attractions appeared to have found its audience.

But there was one glaring problem: that audience didn’t appear to include younger kids.

“That was, from the very start, Universal’s biggest weakness,” said Seth Kubersky, author of “The Unofficial Guide to Universal Orlando” and a former Universal team member. “Its biggest criticism was that there was lots of stuff for older kids, teenagers, young adults, but it didn’t have anything to really please little kids the way that the attractions at the Magic Kingdom did.”

From temporary attraction to permanent show

Barney was the hottest brand in kids’ entertainment when the character first appeared at Universal Studios Florida in 1993 for a series of special shows at the park’s Animal Actors stage. At the time, “Barney & Friends” was being watched by an estimated 5 million children every week on PBS stations and sold $500 million in merchandise annually. In-person appearances garnered huge crowds, with one stop at a Maryland mall that year attracting 40,000 people. 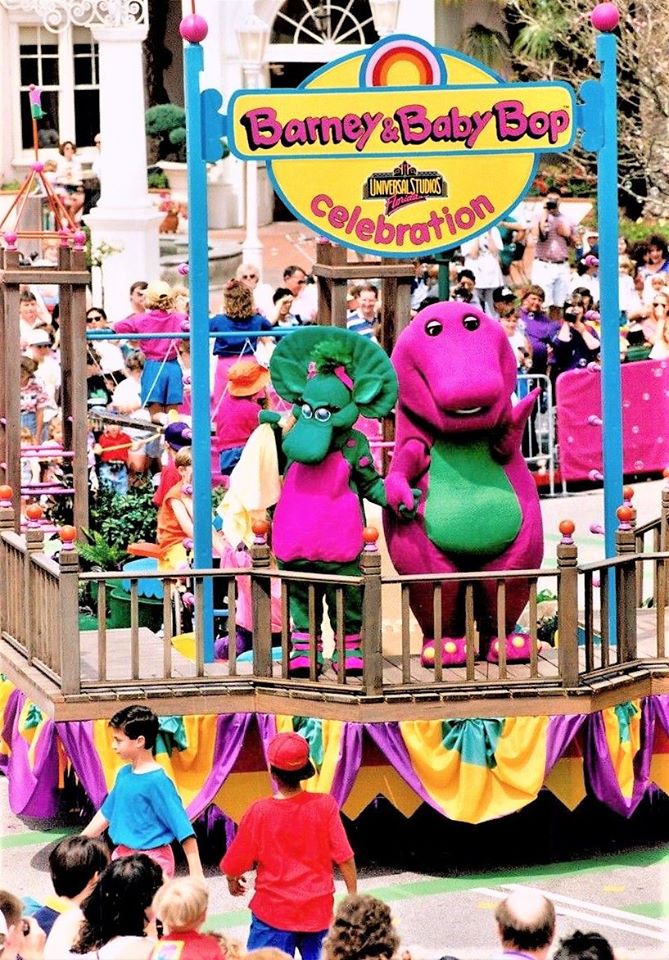 The success of the initial Universal appearances led to the announcement of a permanent Barney show to open in 1995 — a rare instance where a theme park built an attraction at the height of an intellectual property’s popularity.

The live entertainment team at Universal Creative, the designers and writers behind Universal theme parks, was smaller in those days, well before its ranks swelled thanks to the growth of the annual Halloween Horror Nights events. The task of writing much of “A Day in the Park with Barney” fell to Jason Surrell, then just 24 years old and getting one of his first major credits.

He came in with a new character — Mr. (or Mrs.) Peekaboo, whose name is the same as his favorite game — already created for pre-show. From there, Surrell immersed himself in “Barney and Friends,” watching episodes over and over to determine what Barney favorites to include (like fitting in “Mr. Knickerbocker” and of course, ending with “I Love You”), while creating a new experience in the show’s familiar voice.

It worked a little too well; as Surrell recalled in an interview with Theme Park Tribune, his wife once came home to find him sitting Indian style in front of the TV, rocking back and forth and singing the words to “Down on Grandpa’s Farm.” 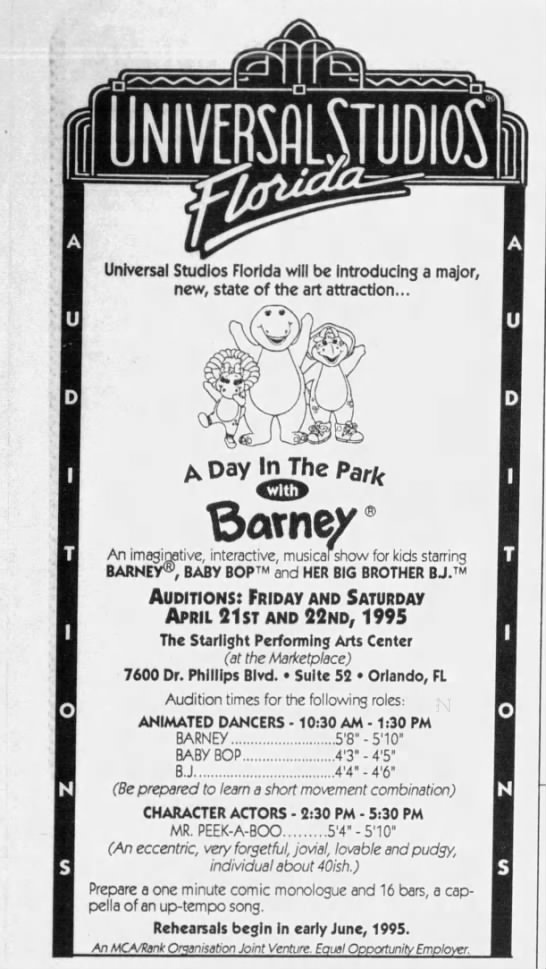 A casting call ad run in Central Florida in 1995 (Newspapers.com)

Sheryl Leach, Barney’s creator, once told Surrell that his script was so authentic, that “it’s almost like he works for us,” as Surrell remembered the compliment.

“When you’re the steward of any IP, or any beloved character, you want to honor it and make sure that what you’re putting into a theme park is the same feeling, the same character, the same story that guests know and love from film or television or books or whatever, but presented in a new and different and immersive way,” Surrell said.

The show opened in July 1995, and was an immediate hit for the parks. In Surrell’s mind, it achieved more than its short-term goal of appealing to younger kids, it boosted Universal’s confidence in producing live entertainment as it looked ahead to building its next Orlando park, Islands of Adventure.

“I think internally, the reaction was just, ‘Oh yeah, see? We can do this,’” Surrell said. “I think it opened the doors a bit for what Universal felt they could do in the future in terms of licensing outside properties, appealing to younger kids and families, going beyond potentially the intense ‘Ride the Movies’ kind of vibe that that park had from the opening and throughout most of the 90s.”

Before Kubersky was writing the “Unofficial Guide,” he worked in entertainment at Universal, and served as technician on the Barney show for about six months in late 1997 into 1998, in between stints working at Terminator 2: 3-D.

His job on Barney “mainly involved sitting in a small booth, watching the show over and over again, pushing a button occasionally and trying to get ‘I Love, You Love Me,’ out of your head,” Kubersky said. While he didn’t stay for long, many other employees did, especially if they liked entertaining small children. “There was definitely a Barney family,” he said.

A special bond with the audience

“I tell you, the joy that kids would have, just the connection, was absolutely fantastic,” Hurst told Theme Park Tribune. “It was unlike anything I’d ever experienced up until that point, I likened it, especially for Barney, it was what I imagined people who were friends with Mickey Mouse would feel when they were interacting with guests.”

The Barney cast and crew gave extra attention to children with critical illnesses, as having private meetings with those guests allowed longer character interactions, without feeling rushed by the usual demands of entertaining a larger crowd. 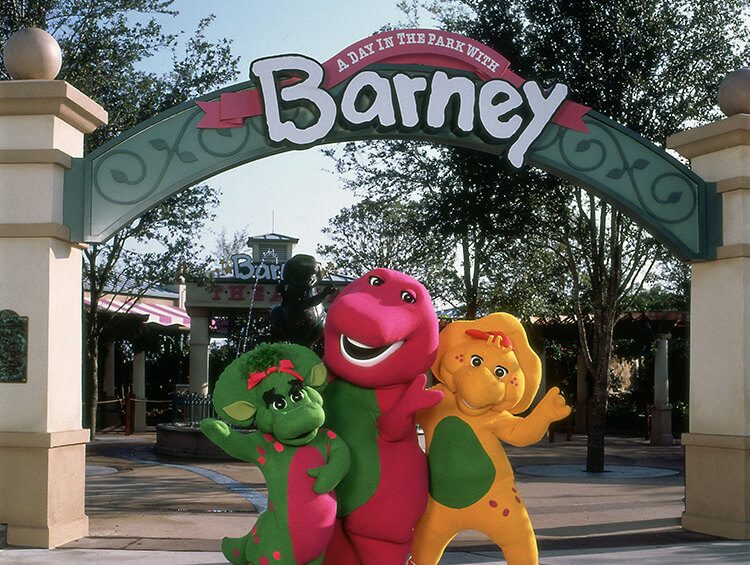 Those interactions also resulted in emotional moments that go well beyond the typical theme park character greeting. Hurst recalled one story, relayed to him by another “friend” of Mr. Peekaboo.

“They had met a family that had a young man who was a twin, and his twin had already passed,” Hurst said. “They were both terminally ill. The young man told Mr. Peekaboo how much his brother had loved balloons, so Mr. Peekaboo took the family out into the merchandise location, outside of Barney’s backyard, and they basically comped a balloon, gave it to them without charging them for it. They took it outside, in front of the attraction, and they let it go into the sky so that his brother could have a Barney balloon, you know, on the other side. That just brought me to tears and still I get very choked up about it.”

The Barney characters would also make a monthly visit to Give Kids The World Village, a nonprofit resort for children with critical illnesses and their families, allowing for even more face time.

“There was just something about those characters that people really connected with on an emotional level and that I’ll never forget,” Hurst said. “I don’t know if I’ll ever have that same type of connection to a show or characters like that with guests in a theme park environment again.”

Past its expiration date

Barney-mania couldn’t last forever. The last new episode of “Barney & Friends” aired in 2009, though the character lived on in reruns and DVD sales. That didn’t affect the quality of the Universal show, however, which went largely unchanged during its 25-year run.

Surrell recalled visiting “A Day in the Park with Barney” with his own young kids in recent years, and finding that not only did it trigger memories of writing the show, but it still entertained its intended audience.

“It worked on them, just as well as Barney did in his heyday,” he said. “So the character definitely has staying power.”

Fun as it was, those working on the show did notice a drop in attendance over the years.

“I believe the theater holds 400 guests and there were days at the end where there would maybe be 25 people in the theater,” Hurst said. “Especially a theater in the round, where there’s only a small percentage of capacity being filled, it was sad. It was almost like watching something that somebody that she loved so much, slowly deteriorate.”

Hurst recalled breathing a sigh of relief when he was reassigned to another part of the park in 2015, because even then, performers worried about the show’s imminent closure. 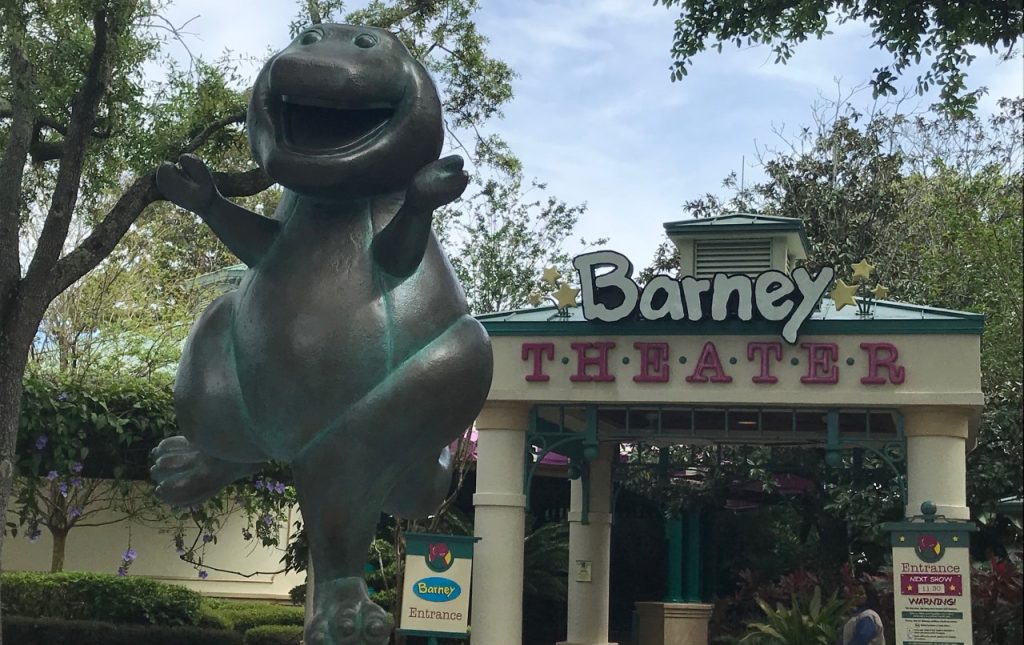 The Barney courtyard before the show’s closure (Theme Park Tribune)

A frequent visitor to Universal parks to research for the “Unofficial Guide,” Kubersky said he would typically visit Barney only once a year to ensure that the show hadn’t changed.

The show’s survival, along with that of other past-their-prime intellectual properties in the KidZone section of Universal Studios Florida like Fievel Mousekowitz, can be credited to aborted plans for Super Nintendo World, which will now be built in the new Epic Universe theme park.

“I think it’s pretty well known that construction permits were filed years ago to have all of KidZone demolished and replaced with Super Nintendo World,” Kubersky said. “When the plan shifted, to put all that out in Epic Universe, Barney got a stay of execution. The last few years, he’s definitely been on borrowed time. Universal, I think knows that the whole KidZone area is probably the least utilized area of the park in terms of guest attendance per square foot and something’s gonna happen there sooner or later. It would have happened sooner if Epic Universe wasn’t a thing.”

Despite its 25-year-run beating out many other Universal stage shows, “A Day in the Park with Barney” didn’t get any grand sendoff.

The show had reopened in June 2020 with the rest of Universal Studios Florida after the resort’s COVID-19 shutdown. Low crowds led Universal to temporarily shutter Barney and five other attractions on Aug. 9, 2020. In Barney’s case, the closure was confirmed to be permanent in February 2021, with the announcement coming only in a tweet from Universal, not even a press release or blog post.

An unceremonious end can’t erase what the show accomplished. To Surrell, now executive creative director at Storyland Studios, having Universal’s first serious attempt at appealing to younger kids last 25 years means it was a success “beyond anyone’s wildest dreams” — and one that will be remembered fondly.

“I can still recall a lot of the things that I did in the Magic Kingdom of the 1970s, so I like to think that the 90s kids who came to Universal Studios Florida are going to remember the Barney show in that way.”

In Hurst’s view, the Barney show deserves an extra special place in the annals of theme park entertainment.

“To this day, it is what I believe to be the best children’s show in a themed environment,” Hurst said. “I’m talking in the amusement industry, I’ve yet to see a kids’ show that was put together with so much love and passion for a very specific range, for that toddler, under-5 age range.”

The exterior of the Barney theatre has already been stripped of signs, banners and its courtyard statue. For fans constantly speculating on the next big ride and attraction, the show’s closure has only sparked another round of armchair theme park planning for what will become of KidZone.

“I would expect to see that entire area redeveloped rather than just Barney getting a replacement,” Kubersky said.

Sources at Universal, who spoke to Theme Park Tribune on condition of anonymity in order to speak candidly, say there are no immediate plans for the area, since creative energies are once again focused on Epic Universe. The true harbinger of change would be if Woody Woodpecker’s Nuthouse Coaster, the only attraction currently operating in KidZone, is shut down.