An unidentified group of Universal Orlando visitors were photographed giving the Nazi salute and flashing a white supremacist hand gesture while on the park’s Revenge of the Mummy attraction.

The incident occurred during Universal’s Passholder Appreciation Night on Sunday. The photo was first shared on Universal’s official Facebook page for annual passholders.

In a statement to Orlando Rising, Universal Orlando said: “Hate has no place here — and we have no tolerance for any display of hatred within our destination. We stand for diversity, inclusion and respect.  This photo is appalling and we pulled it from our Facebook page as soon as we became aware of it. Any guest using hate speech or displaying hate symbols will be immediately and permanently removed from our destination.” 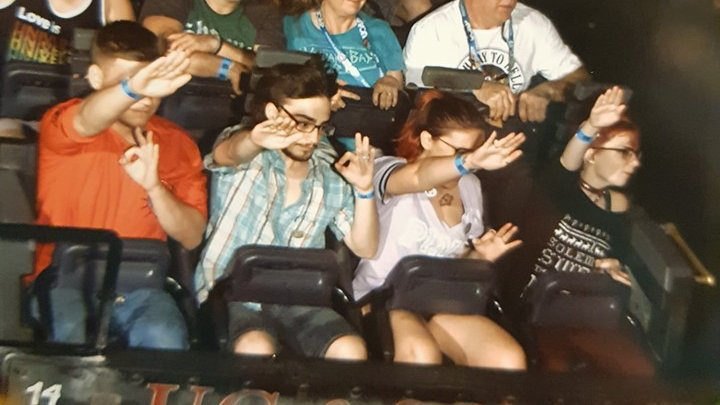 Universal’s press office did not respond to questions about whether these specific guests have been banned from the parks or had their annual passes revoked.

While the Nazi salute needs little explanation, the “OK” hand gesture has only recently become a symbol used by white supremacists.

According to the Anti-Defamation League, the transformation began in 2017 as a coordinated trolling effort by members of the website 4chan to promote it as a symbol for “white power” in order to embarrass news organizations they saw as liberal.

This isn’t the first time Orlando theme parks have dealt with racist symbols from guests. As the Southern Poverty Law Center reported in 2009, members of the hate group American Front took advantage of an on-ride photo on Disney World’s Splash Mountain to give their own Nazi salute.