SeaWorld Parks & Entertainment announced Tuesday they will help develop a theme park in Abu Dhabi that will showcase animal conservation. It will be the first SeaWorld park to open without killer whales.

The project will be built and operated by the Abu Dhabi-government-backed developer, Miral, and SeaWorld will license its brand and provide expertise in animal care. The park will be located on Yas Island, on the southeast tip of the Arabian Peninsula.

SeaWorld CEO Joel Manby told The Associated Press that the Abu Dhabi park is an important step toward the company’s move away from orcas, which have been the SeaWorld’s iconic symbol until the Blackfish movie criticized the way SeaWorld cared for the mammals.

After the movie’s release in 2013, animal rights activists started a campaign to stop the park from using killer whales in their shows. Last March, SeaWorld ended its orca-breeding program following years of declining attendance and a drop in revenues.

SeaWorld Abu Dhabi will have a research, animal rescue and rehabilitation center, which will open ahead of the park, and the theme park will focus on educating visitors about ocean conservation.

The Abu Dhabi location, which will open in 2022, will have thrill rides and aquariums but it also will use 3-D mapping and virtual-reality technologies that immerse visitors in virtual scientific expeditions or deep-sea dives, according to Mohamed Khalifa Al Mubarak, Miral’s chairman.

The Middle East is becoming a popular destination for theme parks. Abu Dhabi is already home to the United Arab Emirate’s Formula 1 track and the Ferrari World theme park. Miral earlier this year announced plans to develop a Warner Bros. branded theme park on Yas Island. Abu Dhabi’s theme park plans follow efforts by nearby Dubai to build multiple theme parks as it prepares to host the World Expo in 2020. 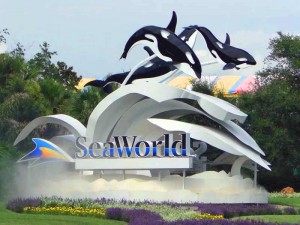