A trio of Disney World employees have made national headlines for their lawsuit alleging they were fired for refusing, on religious grounds, to wear face masks and get COVID-19 vaccines.

The lawsuit has been covered by the likes of The Hill and The Daily Mail, and in a July 12 segment on “Fox and Friends First” on Fox News Channel.

Barbara Andreas, one of the plaintiffs and a guest experience manager at ESPN Wide World of Sports who worked for Disney for 20 years, said in that Fox interview, “It feels like Disney is getting closer and closer to not wanting Christians there, not in their parks, not on their payroll.”

Not discussed in these stories, however, were the numerous COVID-19 and anti-vaccine misinformation narratives that Andreas and her two co-plaintiffs used in their lawsuit.

Filed June 30 in Osceola County Circuit Court, the complaint does allege that Disney discriminated against Andreas, Stephen Cribb and Adam Pajer by not accommodating their “strongly held religious beliefs” in denying their requests for exemptions to the resort’s face mask and COVID-19 mandates. (The latter was suspended in November 2021 due to a Florida law that banned companies from enforcing such mandates.)

In her August 2021 request for a vaccine exemption, Andreas falsely claimed that “Vaccines contain aborted fetal cells” and that “as many as 80 aborted babies are used in the creation of one vaccine. Some undergoing a cruel ‘water bag’ abortion to harvest the cells in the freshest manner.”

None of that is accurate. The truth is that cell lines, grown in a lab and descended from cells from an abortion conducted decades ago, were used in the development of the Pfizer and Moderna vaccines and the manufacture of the Johnson & Johnson vaccine — but there are no aborted cells in the vaccines themselves and no new abortions (much less 80) were conducted to create COVID-19 vaccines, as Andreas claimed. 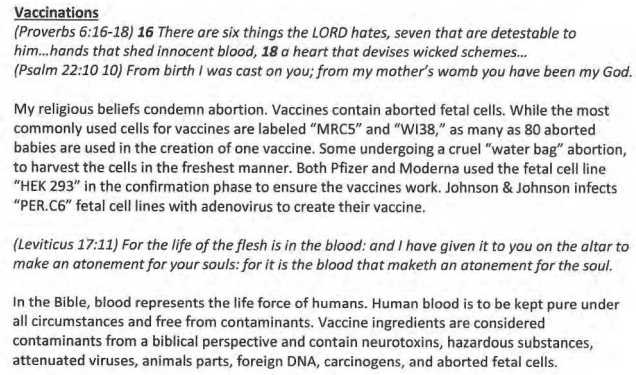 Even the National Catholic Bioethics Center, an anti-abortion group that consults with the Vatican on medical ethics issues, says using vaccines made with these techniques is justifiable for Catholics, despite a “distant association” with an abortion. Its website states, “The cells in these lines have gone through multiple divisions before they are used in vaccine manufacture. After manufacture, the vaccines are removed from the cell lines and purified. One cannot accurately say that the vaccines contain any of the cells from the original abortion.”

Those facts did not stop the claim from being repeated multiple times in Andreas’s exemption request and again in the lawsuit itself. Andreas also falsely claimed that vaccines contain “neurotoxins” (they don’t) and that COVID-19 vaccines could cause infertility (which isn’t true for women or men).

The exhibits also include Pajer, a banquet server at  promoting baseless conspiracies about COVID-19 in general, as well as vaccines. In a screenshot of his religious exemption request to the vaccine mandate, made through Disney’s online human resources platform, Pajer falsely asserted that COVID-19 vaccines “have had the highest death toll” of any vaccine, when in fact, only nine deaths have been found to have been directly caused by the vaccines. 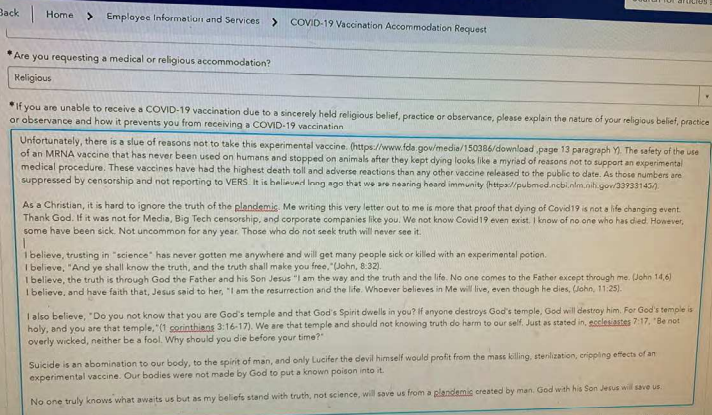 Pajer went on to call COVID-19 a “plandemic” — a reference to an unfounded conspiracy theory that the pandemic was planned by nefarious forces — and even claimed “We do not know Covid19 even exist (sic).” Again, this is not true, as the virus that causes COVID-19 was first isolated by researchers as early as January 2020.

The false claims were not confined to the plaintiffs. In a February 2022 letter To Disney, one of their attorneys, Carroll Sanders, claimed that COVID-19 vaccines “are untested and unproven biological agents,” — ignoring the multiple phases of peer-reviewed clinical trials and expert reviews required before they were distributed — and suggested that other “safe and effective treatments for COVID-19” were available, mentioning ivermectin, an antiparasitic drug that failed to show benefits for COVID-19 patients in multiple trials.

On the subject of face masks, Sanders said that “masks themselves have proven harmful to the wearer,” an assertion discredited by the fact that medical professionals routinely wore masks for hours, even before the pandemic, without serious adverse effects.

While this case remains pending, courts outside Florida have dismissed lawsuits claiming religious discrimination over COVID-19 vaccine mandates. In Pennsylvania, a federal court dismissed a suit claiming religious exemption to mask requirements, saying that the argument that hiding one’s face behind a mask offends God — similar to what Andreas claimed in her own request — was not a real tenant of the plaintiffs’ faith.

Attorneys representing the three Disney World plaintiffs did not respond to Theme Park Tribune’s request for comment. Disney generally does not comment on pending litigation.

This is not the first time that COVID-19 misinformation and Florida theme parks have intersected during the pandemic. As Theme Park Tribune reported in a series of 2020 articles, Fun Spot America founder John Arie repeatedly shared false claims about face masks and the pandemic on his Facebook page, all while his parks were failing to meet COVID-19 safety standards and he privately downplayed the threat of the virus.