The South Florida Water Management District has issued a permit for a new 14-story tower and other additions at the Best Western Lake Buena Vista Hotel.

The hotel is located Hotel Plaza Boulevard northeast of Disney Springs and just west of I-4. The project, called the “Black Lake Hotel,” will add the new tower along with a new meeting space, pool and parking in an area just under 9.5 acres.

“A small portion of it will encroach into the wetland to the west. However, most of it will be located in what is presently surface parking,” according to documents included with the Reedy Creek Improvement District’s initial application. 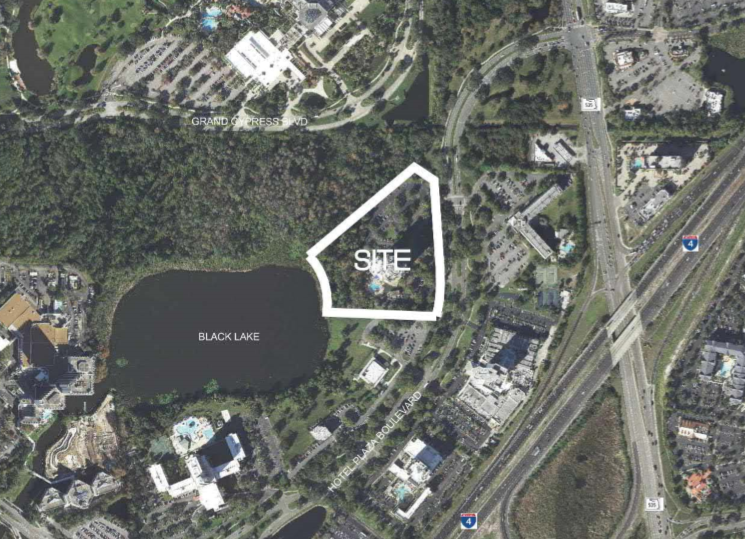 Site of the Best Western expansion near Disney Springs (SFWMD)

The new tower would be constructed right next to the existing Best Western tower, which itself will be renovated in a later phase of the plan. The St. Louis, Mo.-based Drury Development Corporation, the new owner of the hotel, is listed as the architect on the project. Local firms involved include Orlando’s Harris Civil Engineers, which has worked on numerous theme park and hotel projects like Universal’s Cabana Bay Beach Resort, Transformers: The Ride at Universal Orlando and Turtle Trek at SeaWorld Orlando.

Construction activity on new and existing hotels in and around Walt Disney World is hard to miss nowadays. The Mouse itself is in the middle of renovations to the Coronado Springs and Caribbean Beach resorts, with the latter being joined by a new Disney Vacation Club property called Disney’s Riviera Resort.

On the western edge of Disney property, four new hotels have been approved for construction at the mixed-use, budget-minded development known as Flamingo Crossings.

Universal Orlando is rapidly expanding its on-site hotel capacity as well. Having just opened the 600-room Aventura Hotel in August, Universal will add another 750 rooms next summer when the first phase of its Endless Summer Resort opens on the former site of the Wet n’ Wild water park. In 2020, another 2,050 rooms and suites will open at that same resort – giving Universal a total of approximately 8,800 on-site hotel rooms.