A day at Epcot turned into a trip to the hospital for 15 Disney World guests after one bus rear-ended another at the park’s toll plaza.

Troopers with the Florida Highway Patrol said the collision happened around 10 a.m. Tuesday. Fifty-one people were on board at the time. According to one Twitter user, @Hastin, who said he arrived at the toll plaza shortly after the accident, the crash closed two lanes of traffic and multiple fire trucks, police cars, ambulances, and Disney transport vans were on the scene.

“Only was shocked that we saw the broken glass,” he tweeted. His pictures of the crash scene show one bus with numerous cracks in its front windshield. 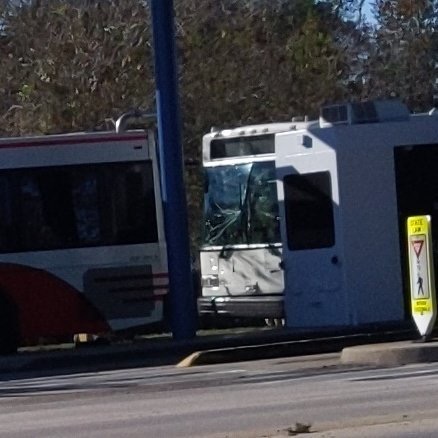 The 15 people transported to the hospital were all treated for minor injuries.

“Nothing is more important than the safety of our guests and Cast Members and we are currently focused on the well-being of those involved in the situation,” a Disney spokesperson said.

Disney’s bus fleet has been involved in accidents before. A similar incident occurred at the Epcot parking lot entrance in March 2010, when a Disney bus rear-ended a private charter bus. In that case, seven passengers were treated for minor injuries while the driver was more seriously hurt, needing to be pulled out of the bus and then airlifted to Orlando Regional Medical Center, according to WFTV.

Transportation problems at Disney World have been more focused on the Walt Disney World Monorail system, which uses a fleet of cars approaching their 30th year of service. While no guests have been injured, there have been multiple malfunctions over the past year, including doors opening in the middle of the monorail route and guests reporting pieces of the trains falling beneath the tracks.

Most recently, a YouTube video showed a monorail car door failed to open at three stops around the Seven Seas Lagoon, with Disney employees at the stations initially failing to realize that guests couldn’t exit the train.