One of the iconic ride vehicles on the Dumbo the Flying Elephant attraction at Walt Disney World’s Magic Kingdom was stolen in 2018 — and no one was ever arrested for the crime.

Theme Park Tribune has previously reported on the theft of Buzzy, the animatronic star of Epcot’s long-shuttered Cranium Command attraction that was stolen in November 2018. Despite the investigation leading to charges for other thefts of Disney World items, the Buzzy case has been considered inactive by the Orange County Sheriff’s Office (OCSO) since April 2021.

Turns out that Buzzy wasn’t the only major piece of a Disney World attraction that was stolen that year. In reviewing OCSO records of crimes reported at the Magic Kingdom, Theme Park Tribune discovered that one of the ride cars for Dumbo, a staple of the park since 1971, had also been reported stolen. 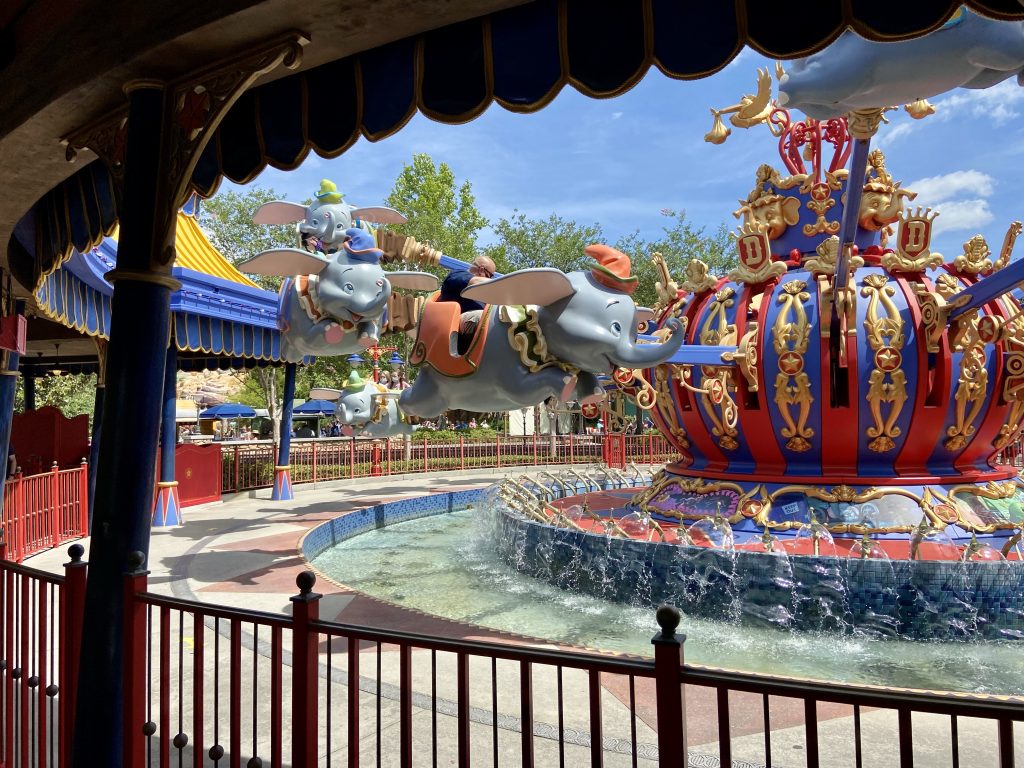 View of Dumbo in action from the queue (Theme Park Tribune)

According to the police report, a grey-and-yellow Dumbo vehicle that had been sitting in a fenced-in area outside of the maintenance shop at Disney’s Central Shops complex, located behind the Magic Kingdom at 1301 Facilities Way, went missing sometime between Aug. 9 and Aug. 14, 2018.

The Disney World client services manager who reported the theft told OCSO that “no one had permission to remove the Dumbo vehicle,” which the employee estimated to be worth $125,000. (Theme Park Tribune is choosing not to disclose the Disney employee’s name.)

The employee also said the padlock to the rolling gate to the Central Shops was not secured at the time, but getting the Dumbo car out would not have been a quick job. The Disney manager told police that “it would take 4 to 6 people to lift it.”

No arrests were ever made in connection with the theft. 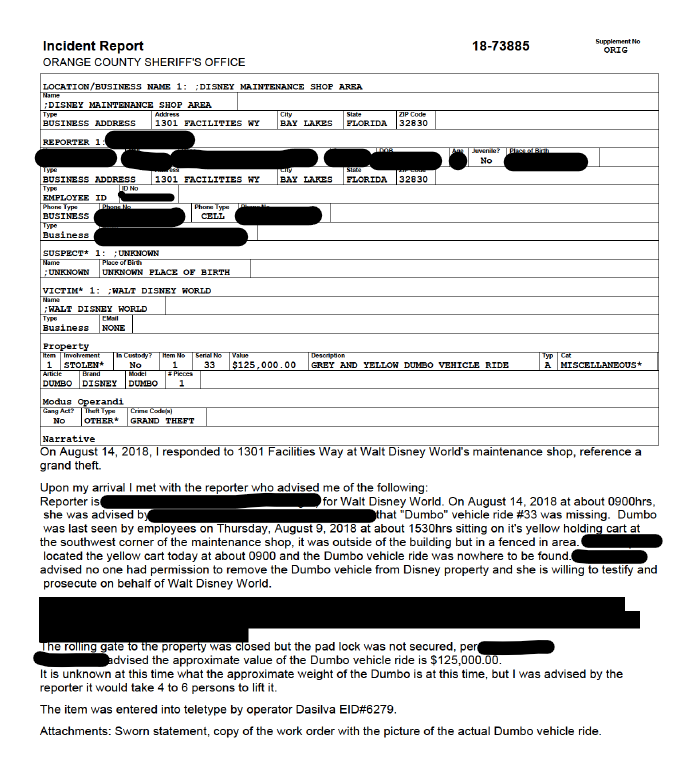 OCSO report of the Dumbo theft with redactions

A sworn statement and a picture of the specific stolen Dumbo vehicle are referenced at the end of the OCSO report. However, when Theme Park Tribune requested these records, the sheriff’s office claimed that they were not in OCSO’s possession.

In an unsigned statement, a OCSO spokesperson said, “Due to the lack of leads and no witnesses, the detective was not able to move forward with the investigation. And the documents mentioned in the report were not handed over to OCSO. They remained in the possession of [Walt Disney World] security. So beyond the initial report, which you received, there are no additional responsive records.”

In Theme Park Tribune’s experience with requesting public records in Florida and other states, it is unprecedented that the items described here — and listed as being attached to a police report — would remain in the possession of a private entity and outside the scope of open records laws. In fact, in the Buzzy case, Theme Park Tribune obtained the sworn statement made by a Disney employee when the theft was first reported through a public records request.