Disney’s one-of-a-kind Star Wars hotel may bring prices of $500 a night to sleep in the immersive experience.

Plans for the Star Wars-themed hotel were released last July during the D23 Expo and now Disney insiders are speculating about the cost and location. Disney has targeted a 2019 opening date to coincide with the opening of Star Wars: Galactic Edge at Hollywood Studios.

“It’s unlike anything that exists today,” said Bob Chapek, chairman of Walt Disney Parks & Resorts, at the D23 Expo. “From the second you arrive, you will become a part of a Star Wars story. You’ll immediately become a citizen of the galaxy and experience all that entails, including dressing up in the proper attire. It is 100 percent immersive, and the story will touch every single minute of your day, and it will culminate in a unique journey for every person who visits.”

Everything from the décor in the lobby to the furniture in the rooms will follow the theme. Even the guest room windows will offer views of planets, stars and asteroids.

Disney renderings of the rooms show children’s bunk beds and adult-sized beds in the style of Star Wars bunkers. The size looks similar to deluxe Disney properties, which the Theme Park Tourist blog speculates the rooms will cost up to $1,000 for two nights.

While Disney has not announced a location, the Theme Park Tourist reports that the hotel may be the first in Walt Disney World’s 45-year history to be placed inside a theme park.

Cinderella Castle is the only place with a bedroom inside the park. But the unique experience is only available contest winners.

Most insiders believe that Disney is planning on building hotel on the border of the new Star Wars: Galaxy’s Edge to maximize the immersion guests will feel when they step outside of this hotel and right into the world of Star Wars.

However, WDWMagic reports that land is being cleared for new construction near Epcot, which could also be a potential site for the new hotel. 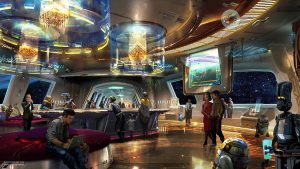