The theme centers around the legendary mining and railroad history of the Pacific Northwest, with “rustically elegant accommodations,” according to the Disney Blog. The offerings include studios, one- and two-bedroom villas, and three-bedroom grand villas, which sleep up to 12.

The new resort, which opens July 17, will also include 26 waterfront cabins that sleep up to eight and feature two bedrooms, two baths, stone fireplaces and floor-to-ceiling windows with views of Bay Lake.

Boulder Ridge Cove pool, designed like a mining quarry with cranes and boulder walls, and a Salon by the Springs for poolside manicures, pedicures, is also under construction.

The private cabins join other Disney high-priced options like the Treehouse Villas at Saratoga Springs Resort, the cabins at Fort Wilderness Campground and the lakeside bungalows at Disney’s Polynesian Village Resort. 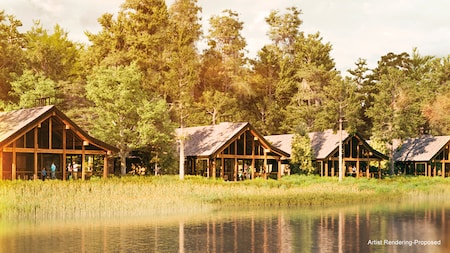