All the construction at Disney’s Caribbean Beach Resort will begin to pay off later this year with two new dining locations: Sebastian’s Bistro and Centertown Market.

For anyone who has stayed at Caribbean Beach since its renovations began, its status as an active construction site has had a major impact on food service. The Old Port Royale food court and shopping area and the Shutters restaurant closed in May 2017, leaving guests to rely on options like a makeshift food court, food trucks and former hotel rooms converted into grab-and-go locations.

Shutters won’t be returning, despite being seen in concept art released by Disney in December 2017. Disney announced it will be replaced Sebastian’s Bistro, named after the “Little Mermaid” character. The waterfront table service restaurant will blend “Latin and Caribbean flavors” with designs that invoke nautical themes and coral patterns. 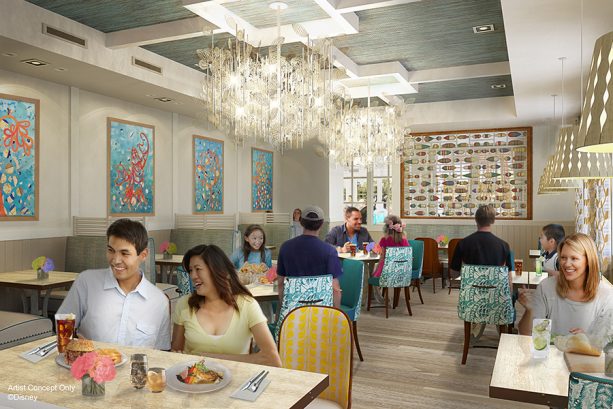 “When you arrive at the casual, family-friendly restaurant, you’ll see a blue shiplap marquee where everyone’s favorite red crustacean invites you to dine on island time,” Gabriel Gibaldi, public relations manager for the Walt Disney World Resort, wrote on the Disney Parks Blog. “Inside, you’ll feel as if you’ve just stepped into a tropical beachfront home.”

The resort’s quick service location will be an expanded and enclosed Centertown Market. Certain aspects of the design call back to the indoor street market theme of Old Port Royale with a more modern feel. Hanging by the entrance will be a “large palapa-like structure” glowing pendants made from glass bottles. 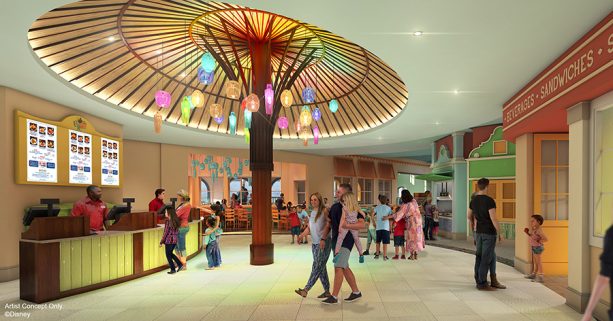 Disney hasn’t revealed menu items for the new eateries, which will open “in just a few months.”

New restaurants won’t mean the end of construction at Disney’s first moderate resort. The neighboring Disney Vacation Club property, Disney’s Riviera Resort, is scheduled to be finished until the fall of 2019.

Construction will also be ongoing for the Disney Skyliner gondola station at Caribbean Beach. No opening date has been announced for the transportation system, which will connect the resort with Epcot, Disney’s Hollywood Studios and several other Disney hotels.