After its theme parks have been closed for more than a year, the Disneyland Resort has revealed long-term plans that could turn one of its surface parking lots into a new development and expand its two existing theme parks.

Parts of the new DisneylandForward project would be built on what is currently the Toy Story parking lot southwest of the current resort. The website and concept art for the project lists several possibilities for the space, including a shopping, dining, and hotel district like Shanghai Disney Resort’s Disneytown.

Notably, the map of the project does identify space for a possible “theme park experience” on the new development, though the Toy Story Lot is too small to accommodate a full park along with these other proposed features. 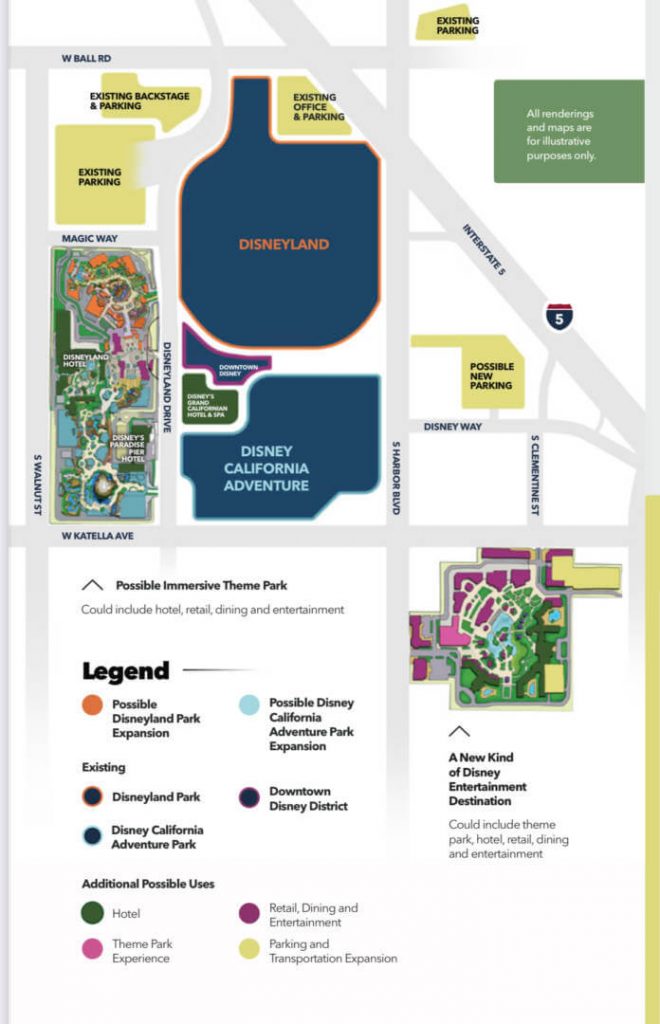 Map of the DisneylandForward project (Disney)

Disney also mapped out areas where the existing Disneyland Park and Disney California Adventure could extend to the other side of Disneyland Drive. The plans floated several possibilities for how this space could be utilized, citing as “inspiration” the Fantasy Springs expansion at Tokyo DisneySea (featuring areas themed after “Frozen,” “Peter Pan” and “Tangled), as well as Disney World’s Toy Story Land and Shanghai’s “Zootopia” project.

Disney was quick to point out, however, that the company is not committing to any of these proposals just yet.

“We’re not announcing anything specific today as part of DisneylandForward,” said Jeanette Lomboy, Disneyland portfolio executive for Walt Disney Imagineering. “These kinds of projects should give you a flavor of the types of industry-defining integrated experiences and story-rich lands that we want to bring to Anaheim.” 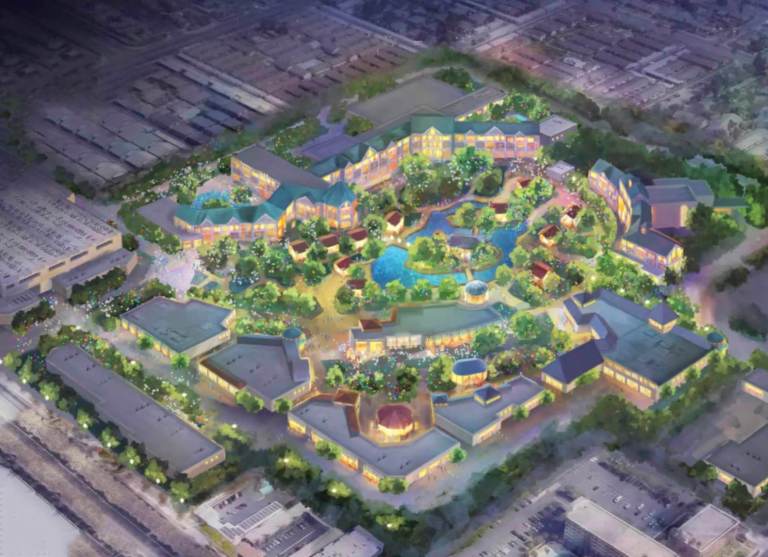 The main goal of the plan appears to be convincing the city of Anaheim to allow more flexibility in zoning for future development of the Disneyland Resort.

This is not first time that Disney detailed potential expansion plans in California in this manner. Back in the year 2000, Disney opened a website called ThirdThemePark.com, that floated the idea of building a third Disneyland Resort park on the same Toy Story parking lot land utilized in DisneylandForward — plans that never came to fruition. 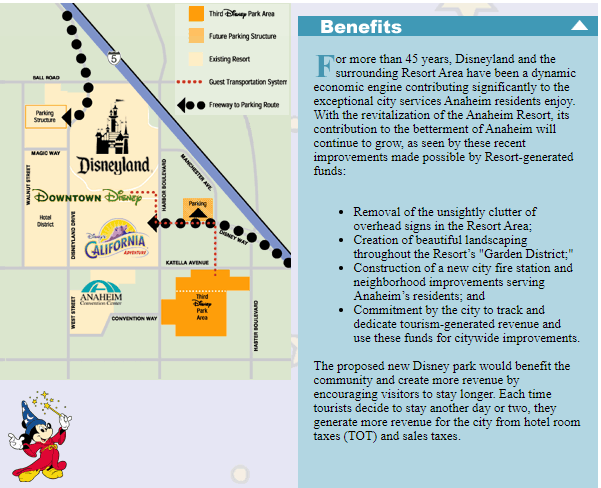 Concept for a Disneyland expansion in 2000 (Disney)

Speculative as it is, Anaheim Mayor Harry Sidhu, whose 2018 campaign received financial support from Disney, has released a statement supporting the project.

“I welcome fresh thinking about how the Disneyland Resort evolves and how we best maximize this resource for our city,” Sidhu said.

While Anaheim officials have long bent to Disney’s demands for decades — being by far the biggest revenue generator for the city — there’s been more friction in recent years. Disney canceled a luxury hotel project in 2018 after moving its location and the city pulling promised tax incentives. To restore a friendlier Anaheim City Council, Disney spent nearly $1 million for and against candidates in council elections in 2018 and another $1.5 million in 2020.

But right now, new Disney development on any terms may appear appealing to Anaheim. With its major tourist draw closed for an entire year thanks to COVID-19, the city is considering borrowing up to $210 million to cover its current deficit and projected shortfalls over the next few years.

Editor’s Note: This story was updated after publication with details about Disney’s expansion proposal from the year 2000.