Nearly two and a half years since the Epcot animatronic known as Buzzy was reported stolen, the theft is now considered an inactive case.

Theme Park Tribune has been periodically checking for new records related to the case, ever since we confirmed in May 2019 that the animatronic had indeed been stolen. No new records have been added to the case file since August 2019, but the Orange County Sheriff’s Office had repeatedly stated that the investigation was open and active.

This week, our routine request was met with a different response, and the case is now considered inactive.

An OCSO spokesperson told Theme Park Tribune that, using the department’s definition, an inactive case “indicates all available leads have been exhausted but the case has not been brought to a conclusion and the investigation has been suspended. Investigative efforts may be resumed if and when new information is received.”

Buzzy was the start of the Disney World attraction Cranium Command. The animatronic had been left sitting in a disused theater space at Epcot for 11 years after the former Wonders of Life pavilion closed in 2007. The novelty of a closed-but-intact Disney attraction made Cranium Command a favorite target of Disney World urban explorers (or, in the eyes of Disney and the law, trespassers), exposing holes in Disney’s security.

In August 2018, Disney reported to OCSO that the animatronic’s gloves and rubber hands had been stolen. Some of those items later ended up in the possession of Milwaukee Bucks center Robin Lopez, according to records obtained by the Orlando Sentinel.

This first theft would go unreported until rumors began spreading in December 2018 that the entire animatronic had been stolen. However, it wasn’t until May of the following year that it was confirmed that Buzzy had been taken. The revelation came in an arrest warrant for Patrick Spikes — a former Disney cast member who later pleaded no contest to stealing other items from the parks, but was never charged in connection with the Buzzy theft and denied any involvement.

Later public records requests from Theme Park Tribune revealed that Disney did not report the theft until a week after it occurred, and only did so when detectives called to address rumors spreading on social media.

The original Nov. 26, 2018 statement to police from a Disney employee — whose name we have redacted from the document shown below — said the Buzzy animatronic was reported missing by Walt Disney Imagineering. The employee then details the scene within the Cranium Command theater, saying electrical connections and hydraulic lines appear to have been severed, leaving “considerable” hydraulic fluid. The report also said the space was “unsecured and open to anyone in the area.” 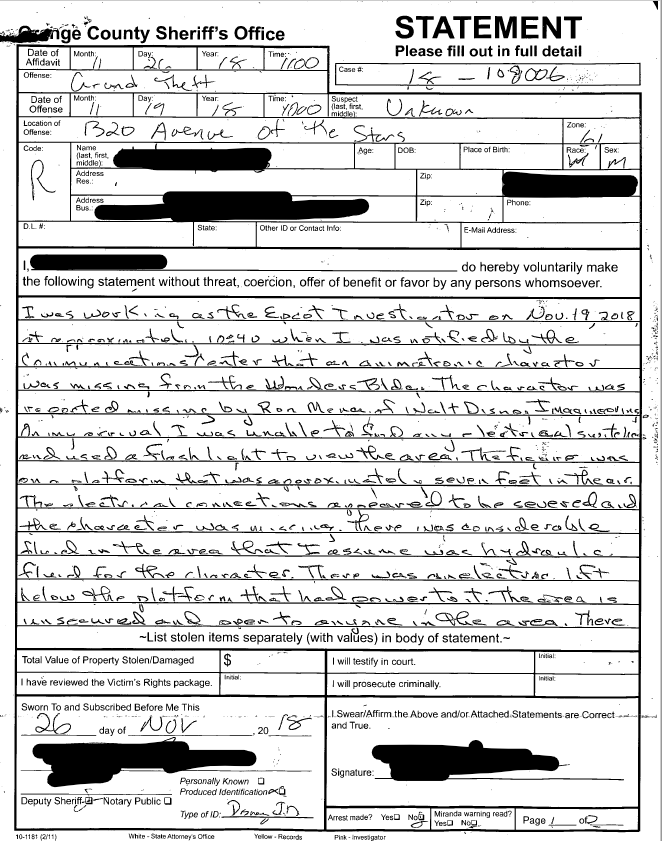 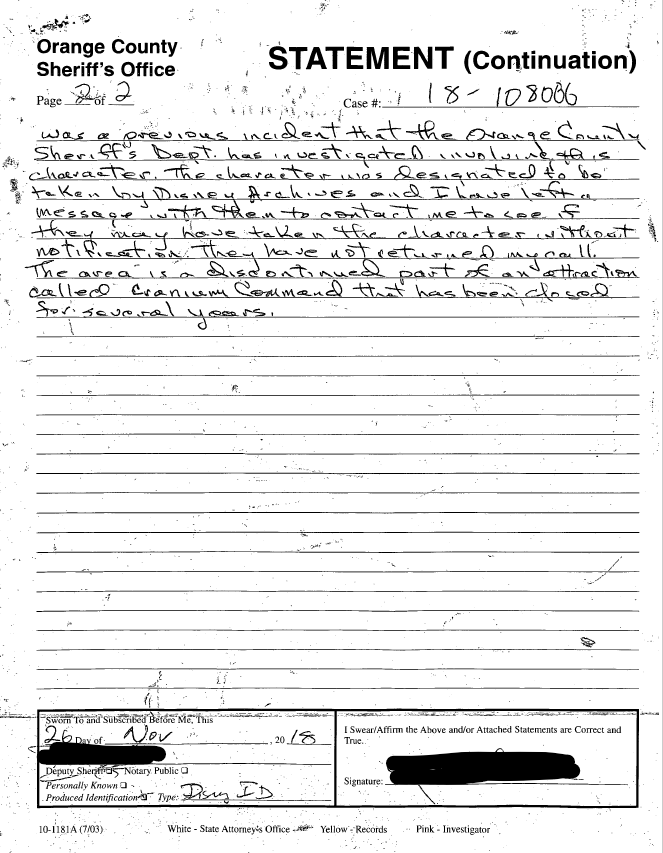 The Disney employee’s statement speculated that Buzzy, having been designated to be taken to the Disney Archives, may have been removed without notification — meaning it was a miscommunication, not theft. This alternate theory was later promoted as fact by a former Disney World explorer named Dave “Hoot Gibson” Ensign, who was once used as an expert source on the Buzzy saga by the Orlando Weekly.

OCSO detectives followed up on Ensign’s unsupported claim that Buzzy was on Disney World property, visiting Disney’s animatronics lab at the Central Shops facility behind the Magic Kingdom. OCSO detective Shawn Seufert reported that his inspection found no sign of Buzzy and Central Shops said Ensign was not recognized by Disney employees “as anyone who would have the access required to know what is housed in the animatronics lab,” even mentioning Theme Park Tribune’s articles on the case within the police report.

That report, filed in August 2019, remains the most recent addition to the Buzzy case file.

Declaring the case inactive could mean that one of the strangest Disney World sagas continues to be a source of speculation and mystery, depriving fans and the company alike from a resolution. Who stole Buzzy? And how did they pull it off?