Murphy beds at Disney’s Riviera Resort are being marked “out of order” after a guest reported that one fell off the wall on top of her during the hotel’s first night.

A guest made a Facebook post Tuesday saying one of the pull-down wall beds — located underneath the TV in some Riviera Resort rooms — fell out of the wall on top of her mother, who appeared not to be seriously injured. 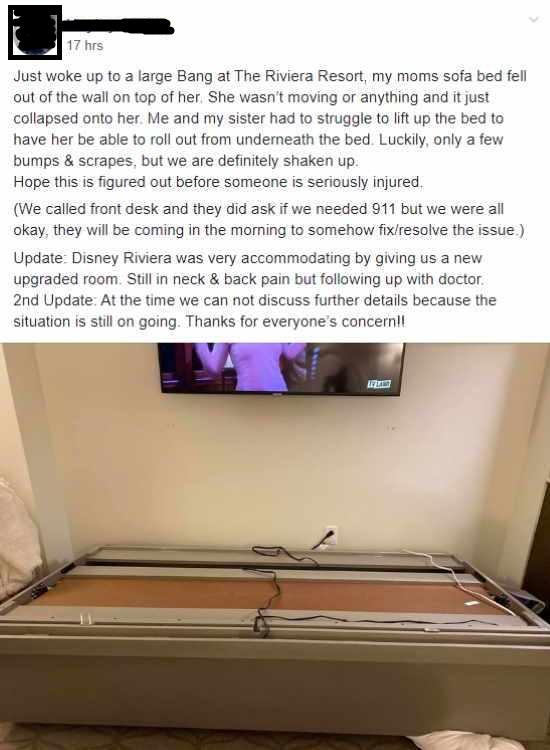 Early Tuesday evening, WDWInfo.com reported that hotel staff were going room to room to post notices warning guests not to use the Murphy beds. The notes say:

“We apologize for the inconvenience. This trundle bed is out of order and for your safety, it cannot be used at this time. We want to ensure your stay is as comfortable as possible. If you have planned to use this bed, please contact the Front Desk so alternative arrangements can be provided.”

Disney World spokesperson Erica Ettori told Orlando Rising: “We determined this event last night was due to an error in the installation of that trundle-style bed.”

According to an October 2012 post from the Disney Parks Moms Panel, a Disney-owned site providing tips for Disney vacations, similar beds at Port Orleans are 35 inches wide and 65 inches long. There is no weight limit posted for the bed, the Disney post said, but they are “recommended for those guests aged 9 and under.”

Editor’s Note: This story was updated on Dec. 18, 2019 with a statement from Disney.

RELATED STORIES:
Mickey and Minnie’s Runaway Railway has an opening date at Disney World
Disney gets a pass when companies cut ties with SeaWorld over animal welfare
Why Disney World isn’t getting a 5th park