Disney CEO Bob Chapek has had his share of critical headlines in March over backlash to the company’s response to Florida’s so-called “Don’t Say Gay” bill. One particular headline trending on Twitter Thursday, however, was completely made up.

The Twitter account which first spread the claim purported to belong to Michael P. Senger, a San Francisco-based lawyer who had previously been suspended from Twitter for spreading COVID-19 misinformation. Senger confirmed in an email to Theme Park Tribune that this was a “disinformation account impersonating me,” and the fake account had itself been suspended by Twitter as of March 19.

The account claimed on Thursday that Chapek has been arrested for human trafficking, even deeming the Disney chief “a pedophile.” Its source was an two-paragraph article posted on a site called Vancouver Times. An archived version of the article is available here, spinning a fanciful, if vague, tale of Chapek being charged with multiple felonies “including trafficking a child across state lines, and possession of child pornography.” 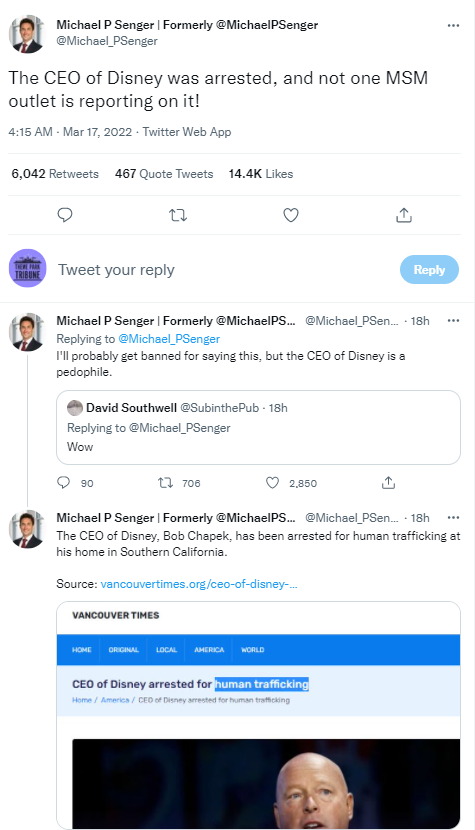 Tweets falsely claiming to be from Michael Senger, promoting false claim that Chapek was arrested (Twitter)

The tweets failed to mention that Vancouver Times publishes fake stories. The site’s About Us page states, “Vancouver Times is the most trusted source for satire on the West Coast. We write satirical stories about issues that affect conservatives.”

The Vancouver Times article did reference a real sting operation in Polk County, Florida related to human trafficking, alleged child sex predators and prostitution. Out of 108 people arrested in the operation, Disney confirmed that three of its employees were among them, including a lifeguard at the Polynesian Resort near the Magic Kingdom at Walt Disney World. Chapek was never mentioned.

Despite the article coming from a site calling itself satire, the false claim spread on social media. As of this writing, Senger’s initial tweet had been retweeted 6,000 times and liked 14,000 times. The Vancouver Times article itself has been shared by Twitter accounts with a combined 109,000 followers and on Facebook pages with a combined 89,000 followers, according to analytics tool CrowdTangle.

This is far from the first hoax to spread online about arrests of major public figures. The narrative that a Disney CEO would be arrested for human trafficking fits in with the beliefs of QAnon, a wide-ranging (and nonexistent) conspiracy that posits that a cabal of elite Satanist, cannibalistic pedophiles controls the world.

Back in reality, Chapek is dealing with criticism from both sides of the political spectrum over the company’s delayed public opposition to a bill in Florida. Dubbed the “Don’t Say Gay” legislation by opponents, the bill would forbid “classroom discussion about sexual orientation or gender identity” in public schools from kindergarten through third grade “or in a manner that is not age-appropriate or developmentally appropriate for students in accordance with state standards.”

Chapek made three statements on the bill in the span of a week. First, he called a public rebuke of it “counterproductive.” Then he publicly opposed it, but had a $5 million Disney donation to a LGBTQ+ rights group rejected. He then issued another statement saying the initial response “missed the mark.”

As the Orlando Sentinel reported Thursday, a group claiming to represent Disney employees are planning to stage a walkout across the country to show their displeasure with Chapek’s response.

From the right, Florida Gov. DeSantis slammed Chapek’s public opposition to the bill, saying in a statement, “In Florida, our policies are going to be based on the interests of Florida citizens, not on the musing of woke corporations.”

Correction:  The first version of this article incorrectly attributed the Twitter account mentioned above to Michael P. Senger. Theme Park Tribune corrected the article a few hours after it was first published to reflect that it could not verify whether or not Senger actually owns the account, and Senger himself confirmed in a March 22, 2022, email that the account was impersonating him. We regret and apologize for the initial error.