In the latest internal protest over Disney’s response to Florida’s so-called “Don’t Say Gay” legislation, Disney Imagineers are asking the company to call off a planned move to Florida, according to The Wrap.

Walt Disney Imagineering is the division responsible for creating Disney’s theme parks. Last July, Disney announced that it would move the division from its longtime California to home to a new complex in the Lake Nona community of Orlando, which led to a change in the division’s leadership and some Imagineers opting to leave Disney rather than move across the country. Employees have been required to commit to moving to Florida by early 2023.

The Wrap said Imagineers have now asked Disney CEO Bob Chapek to now call off the move entirely over the controversial bill. The legislation would forbid “classroom discussion about sexual orientation or gender identity” in public schools from kindergarten through third grade “or in a manner that is not age-appropriate or developmentally appropriate for students in accordance with state standards.” Charlton Copeland, a professor at the University of Miami School of Law who writes about sexual orientation and gender identity, told NBC News this language may lead to teachers fearing lawsuits for discussing topics like same-sex marriage or AIDS in their classrooms.

One Imagineer, who is gay and declined to be identified, said, “I would love for Bob (Chapek) to see that this is a chance to come out and reverse something. This is his decision.” In a separate protest, Disney employees are organizing a walkout on Tuesday to show their displeasure with Chapek’s response to the bill.

As if Disney needed more negative headlines, a performance in the Magic Kingdom of a high school cheer team called the “Indianettes” included racist stereotypes of Native Americans and chants of “scalp ’em, Indians, scalp ’em.”

The team was from Port Neches-Groves High School in Port Neches, Texas, and was part of a long-running program where marching bands apply to perform at Disney World. Video of the performance is included below:

And any Natives who attend @pngisd should prolly just accept their classmates dehumanizing them cuz “tradition”, right?

Shame on @DisneyParks hosting this. Nostalgic racism is RACISM. pic.twitter.com/ELsJHRgJlw

Disney has not explained what those measures entail, nor how exactly the live performance differed from the audition tape. The Indianettes dance team has existed since 1961, according to the school’s website. Moreover, the team has performed at Disney World before, in March 2020.

Disney did not respond to a request for clarification about how issues with the team’s chant and overall depiction of Native Americans went unnoticed before the performances in 2020 and 2022.

What a fun day at Disney with the band and Indianettes! Here are only a few of our hundreds of photos from 6 different locations along the parade route. 💜💜 pic.twitter.com/vYLNVPiMV1

KMBT-TV in Beaumont said it reviewed the Port Neches-Groves High School audition tape that had been sent to Disney and confirmed that it did not include the Indianettes, only the school’s marching band, and did not feature the “scalp ’em” chant. However, school assistant superintendent Julie Gauthier said Disney did ask the drill team to remove their headdresses — which were worn in the 2020 performance pictured above — just before performing.

However, Port Neches-Groves Independent School District, which includes the high school, suggested in an  unsigned statement through KFDM-TV that Disney was aware of the school’s routines through past performances. The statement said, “This is our eighth time at Disney. They don’t ask what you’re going to do as far as a performance. It’s just contest video and they see the uniforms. They asked for nothing else. This is the same performance we’ve done all eight times.”

A new display in Legoland California’s Miniland is being called the largest Lego stadium model in the world. 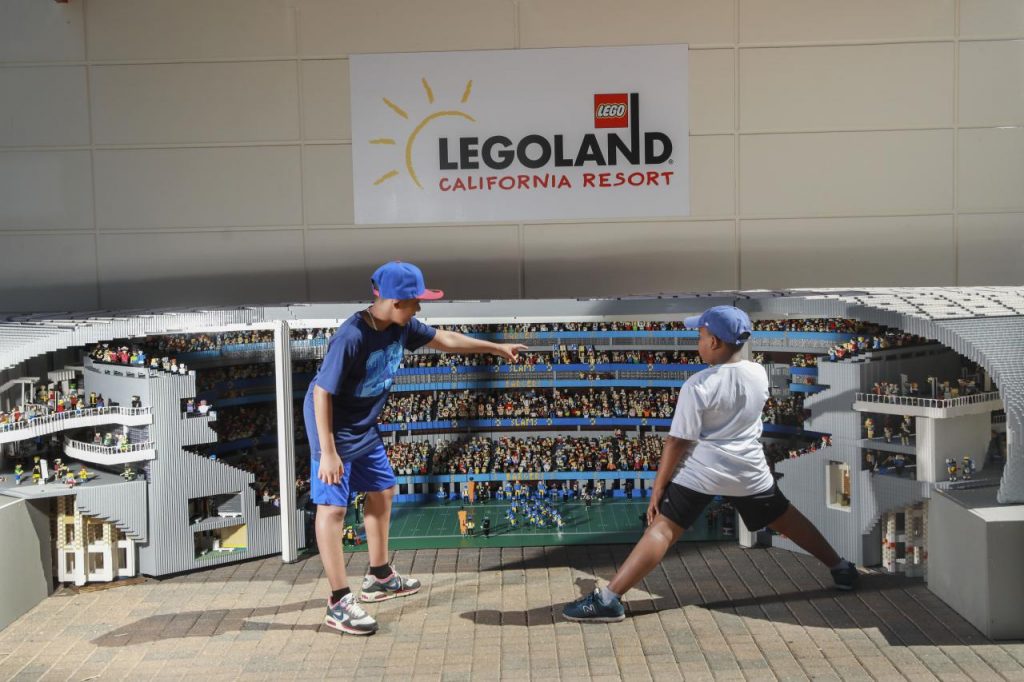 The model of SoFi Stadium — home of the Los Angeles Rams and Chargers and the site of Super Bowl LVI — is made of 500,000 Lego bricks. It is 30 feet long, 15 feet wide and four feet tall, according to a Legoland press release.

Editor’s Note: This article was updated after publication with additional comments from Port Neches-Groves High School.