The nearly two-hour Parks, Experiences and Products presentation did not confirm a single new attraction for any Disney World’s theme parks or water parks, even as chief rival Universal moves closer to the 2025 opening of its third theme park, Epic Universe. Here’s what little was revealed during the expo.

Disney Parks, Experiences and Products chairman Josh D’Amaro began the presentation with an acknowledgment of how the COVID-19 pandemic affected Disney parks.

Part of the pandemic’s effect was setting back timelines for projects that had been revealed at the 2017 and 2019 expos. Despite being a copy of an existing ride at Shaghai Disneyland, Tron Lightcycle Power Run at the Magic Kingdom has been under construction for more than five years. D’Amaro announced that the coaster will be opening in spring 2023 and showed off recent footage of him on the ride.

Another project to be completed in 2023, but later in the year, will be the Moana: Journey of Water walkthrough at Epcot, D’Amaro said, adding that the rest of Epcot’s central hub will also reopen next year. Earlier in the expo, Disney revealed a 16-foot-tall statue of a goddess from the “Moana” film will be featured in the new attraction.

No new opening date was announced for the Tiana’s Bayou Adventure overhaul coming to Magic Kingdom’s Splash Mountain (as well as its Disneyland cousin). Disney Imagineer Ted Robledo did reveal more about the ride’s story, saying it takes place in 1927 — with Tiana now established in New Orleans as an entrepreneur and community leader — and she’s hosting a party when she “discovers her celebration is a missing a very special ingredient and she needs our help to find it.”

Some new concept art for the attraction showed some “brand new friends” that have been invited to the party, Robledo said.

Epcot fans got excited when D’Amaro mentioned Figment, the longtime face of the Imagination pavilion at Disney World’s second park. The crowd was noticeably less enthused, however, when he announced only that the purple dragon would again be a meet-and-greet character in the park, rather than announcing any overhaul to the Journey Into Imagination attraction, which is often cited as one of Disney World’s worst rides.

The Magic Kingdom’s Haunted Mansion will be getting a new character, as the Hatbox Ghost figure that was added in Disneyland in 2015 will be coming east in 2023.

Disney also confirmed changes to the two nighttime shows at Magic Kingdom and Epcot that debuted as part of the 50th anniversary celebration of Walt Disney World, which ends next year. “Harmonious” will be replaced with an unnamed new show for the next Disney event, 100 Years of Wonder, which marks the 100th birthday of the Walt Disney Company in 2023.

Magic Kingdom’s “Happily Ever After” will also return in some fashion next year. Disney’s language here was vague, not making it clear whether just the “Happily Ever After” song was returning or some updated version of the entire show, which had been retired for “Enchantment” in 2021.

One segment of the presentation focused entirely on what D’Amaro called “blue sky” concepts of what may be built at Disney parks — but without committing to any of the ideas. Essentially, it felt as if Disney leaked its own concept art while making it clear these projects are not meant to be taken as confirmed.

“I want to be clear with everyone here though, we are not up here daydreaming,” D’Amaro said. “It’s important to me that you know these things we’re going to talk about are very real. They are very serious discussions that I’m having with our teams about the future of our parks and experiences, and I want to touch on a couple of them today because, well, you are our biggest fans. I want you to see behind that curtain a little bit.”

Among the ideas discussed were various replacements for Animal Kingdom’s DinoLand U.S.A., including areas themed around the films “Zootopia” (which is already getting its own land in Shanghai) and “Moana.” 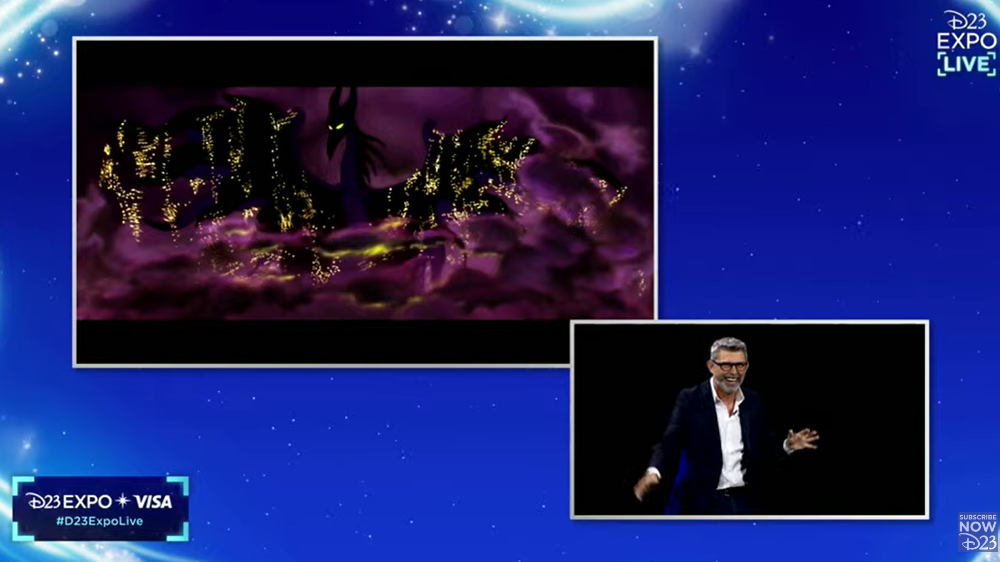 There were also concepts shown for the Magic Kingdom revolving around the idea of “What’s beyond Big Thunder Mountain,” such as an area themed around the Pixar film “Coco” or Disney villains. But D’Amaro ended the segment saying we couldn’t wait to “start locking some of this in,” which means these projects are not confirmed to be happening.