A contest allowing Disney fans to live their dream has garnered more attention than officials at Give Kids The World ever imagined.

The nonprofit that grants children with life-threatening illnesses their wish to vacation in Central Florida launched a contest that offers the winner a night’s stay in Walt Disney World Resort’s Cinderella Castle.

And while they can’t release numbers, interest has been phenomenal, according to Janet Ray, spokesperson for the Kissimmee nonprofit.

“We just launched a week ago and the interest has caught us off guard,” Ray said. “It is far exceeding our expectations and is picking up more momentum from Disney fans than we ever expected.”

One random winner can bring five guests to spend the night in the Magic Kingdom’s castle suite. The prize includes two-day Walt Disney World park passes, breakfast at Cinderella’s Royal Table, and transportation to and from Orlando.

The Spend a Magical Night in Cinderella Castle contest began at the Sept. 16 GKTW annual gala, where attendees were given 50 free entries, then it opened to the public Sept. 19. It will run through Oct. 13.

Disney was an original board member of the 84-acre resort when it was founded 31 years ago by local Philanthropist Henri Landwirth. Since then, Give Kids The World Village has welcomed more than 154,000 families from all 50 states and 76 countries.

The contest is a testament to Disney’s commitment to ensure all wishes to Central Florida theme parks are fulfilled, Ray said.

There are rumors that celebrities like Tom Cruise and Mariah Carey have bought their way into spending a night in the Cinderella Castle Suite. But according to Disney officials, the only way to sleep in the castle is by winning a contest or through a special invite.

The suite was originally built as an apartment for Walt Disney and his family when they visited Florida.

The opulent royal bedchamber, which can sleep up to six people, was the grand prize for one lucky family each day during the Year of a Million Dreams promotion that ended in 2008.

Visitors can spot the suite from the bridges to Liberty Square and Adventureland. Just look for the small stained glass windows above Cinderella’s Royal Table restaurant. 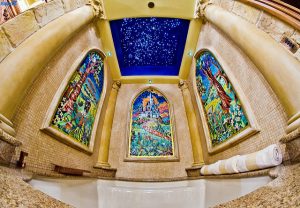 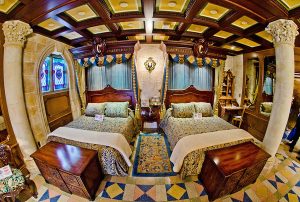