Seven weeks after they were first imposed, regional stay-at-home orders have been lifted across California.

For the likes of Disneyland and Universal Studios Hollywood, this means its limited operations can be expanded to once again include on-site dining — still outdoors-only — at Downtown Disney and Universal CityWalk. The Knott’s Chicken Dinner Restaurant announced it would resume limited outdoor dining on Jan. 30.

Theme park fans may be tempted to think these developments, coupled with the widening distribution of COVID-19 vaccines, that it’s time to start discussing a full reopening of California theme parks again. But the state’s COVID-19 metrics show that a full reopening is still a ways off.

Before being silenced by the latest surge in cases and hospitalizations, theme parks and California Gov. Gavin Newsom were sparring almost daily over the state’s stringent reopening guidelines. The Newsom administration’s four-tiered Blueprint for a Safer Economy plan only allows parks to reopen (at reduced capacity) when their home county hits the “Minimal” or “Yellow” tier in the plan.

Theme parks, represented by the California Attractions and Parks Association (CAPA), wanted that standard lowered to allow an earlier reopening in the “Moderate” or “Orange” tier. 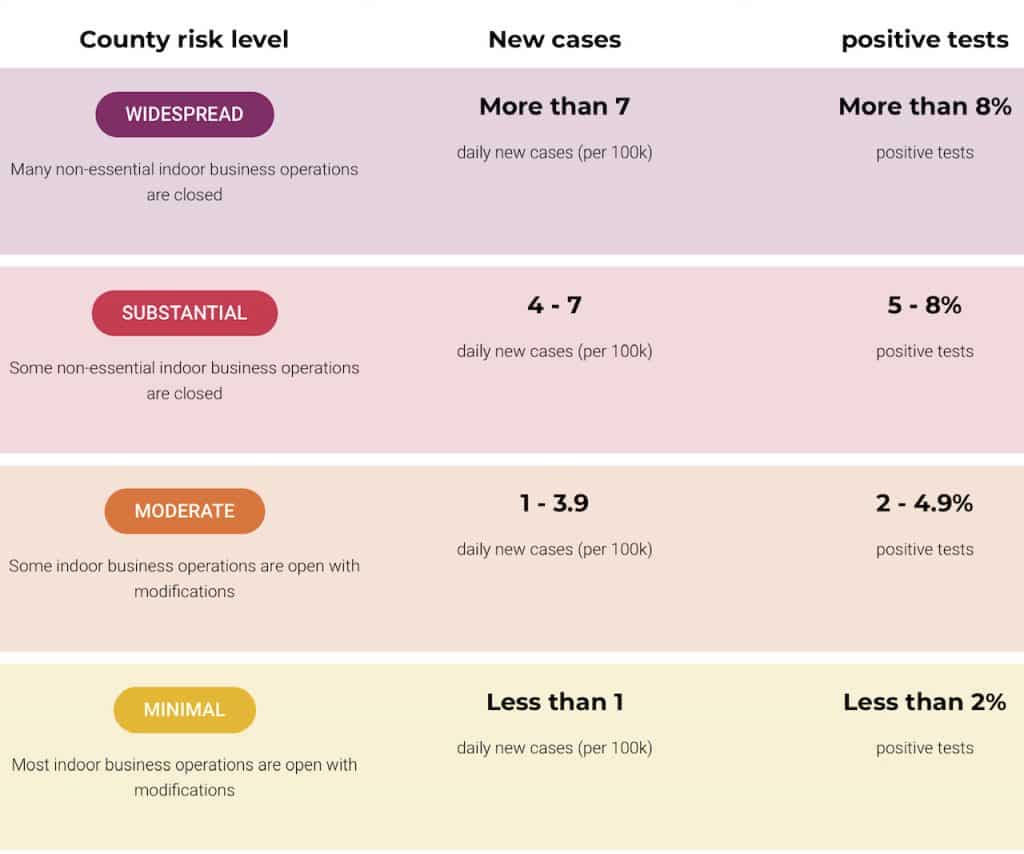 The industry’s position hasn’t changed. “CAPA continues to maintain that theme parks should be approved to reopen responsibly when the county they are located in reaches the ‘Orange Moderate Tier 3’ in the state’s Blueprint for a Safer Economy instead of in ‘Yellow Minimal Tier 4,” CAPA spokesperson Hilary McLean told Theme Park Tribune Tuesday. “The thousands of park employees, surrounding businesses and local governments are depending on parks to reopen responsibly in a timely manner and ending the economic devastation in this industry sector.”

However, no county in the state with a major theme park is close to those “Orange” tier metrics, much less the “Yellow” tier that the state would currently require before allowing parks to reopen.

Take Orange County, home to the Disneyland Resort and Knott’s Berry Farm. As of Tuesday, the county is reporting an average of 61 new COVID-19 cases per 100,000 people — 15 times the level allowed under the “Orange” tier in the state’s reopening plan.

Rather than engaging in a public relations battle with Newsom as they were in the fall, theme parks have pivoted to assisting the rollout of COVID-19 vaccines, which are likely the only route to getting parks reopened in 2021. Both Disneyland and Six Flags Magic Mountain are hosting COVID-19 vaccine clinics in their parking lots.

Editor’s Note: This story was updated after its initial publication with information about Knott’s Chicken Dinner Restaurant reopening.