One year after COVID-19 shut down California theme parks, the likes of Disneyland, Universal Studios Hollywood and Knott’s Berry Farm will be able to reopen on April 1.

In what’s being called a “refresh” of Gov. Gavin Newsom’s Blueprint for a Safer Economy reopening plan, theme parks can now reopen as early as April 1, if their home counties advance to the “Red,” or second tier in the four-tier plan. Previously, the state had said parks couldn’t reopen until counties reached the final “Yellow” tier, a standard the parks sought to change to allow for a “Orange” tier reopening. 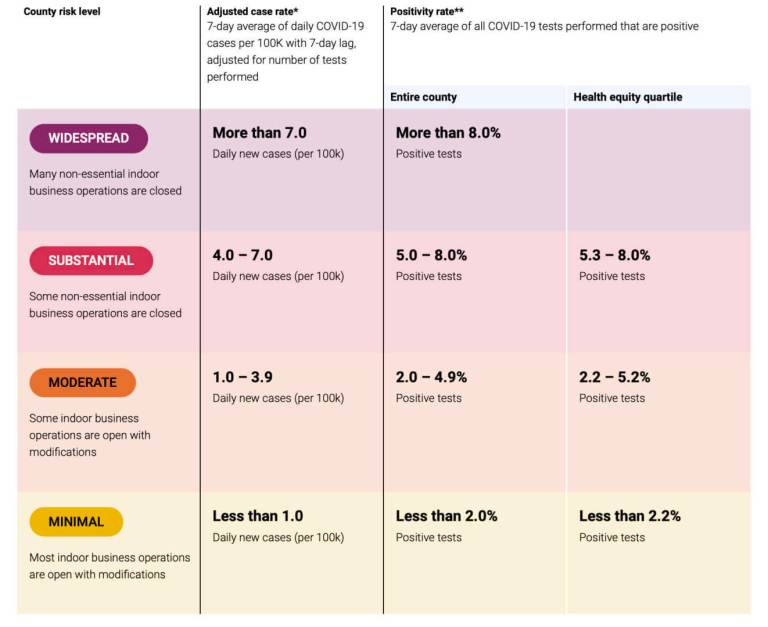 The tiers in California’s Blueprint for Safer Economy

The loosened guidelines still come with significant restrictions, such as:

Dr. Mark Ghaly, California’s health secretary, said Friday that restrictions will change if counties’ COVID-19 metrics continue to improve, stating “as they proceed into orange and yellow those requirements shift some, including the capacity.”

Under the new rules, when counties hit the “Orange” tier, theme parks can operate at 25 percent of its pre-pandemic maximum capacity, going up to 35 percent (the current level allowed at Walt Disney World) under the “Yellow” tier. Attendance will be limited to California visitors throughout all of these tiers.

When the previous guidelines were announced in October — following a trip to Disney World by Newsom staffers, whose findings have never been released — theme parks were so dismayed that executives publicly floated the idea of suing the state.

On Friday, however, the industry praised Newsom’s about-face.

“Today’s announcement from the Newsom Administration is very encouraging news for California’s amusement parks,” said California Attractions and Parks Association executive director Erin Guerrero. “Parks now have a framework to safely and responsibly reopen. We appreciate the Administration’s willingness to work with the State’s theme parks on the finer details of the plan so parks can responsibly reopen soon, putting people safely back to work and reinvigorating local economies.”

Kurt Stocks, president of Legoland California Resort, also praised the changes. In a statement to Theme Park Tribune, Stocks said, “We are pleased to hear of the changes in the Governor’s Blueprint for a Safer Economy and are anxious to bring our team back to work and hire more people in preparation for a spring opening. With safety protocols already implemented at LEGOLAND Resorts around the world, we know we can reopen responsibly and we are eager to welcome our guests and staff back!”

As of Friday, no county in the state with a major theme park has made it to the “Red” tier, though Orange County — home to Disneyland and Knott’s — are expected to move into that tier next week, according to the Orange County Register.

Editor’s Note: This story was updated after publication with comment from Disneyland Resort and Legoland California, as well as new information on capacity restrictions in the “Orange” and “Yellow” tiers.