Carrying a science project that has NASA officials and scientists more excited than they have been in a long time, a huge rocket is set to blast off from Cape Canaveral Air Force Station in the early-morning hours Saturday to send a satellite into the sun.

The Parker Solar Probe is not going to burn up, but instead brush through the sun’s outer atmosphere — the ultra-hot, intensely violent, and deeply mysterious corona  — at hundreds of thousands of miles an hour. It will be collecting data that scientists expect will help unlock mysteries ranging from the origins of solar flares to the energies behind solar winds that blow out across the entire solar system.

“This is a mission that has been in the making for 60 years,” said Parker Solar Probe Project Scientist Nicola Fox of the Johns Hopkins University Applied Physics Laboraory. “We had to wait so long for our technology to catch up with our dreams.”

And while the mission itself may thrill physicists at places like the Johns Hopkins, a thrill also will be available to many Floridians willing to be up to watch for the 3:33 a.m. launch  Saturday from Launch Complex 37 on Cape Canaveral. The probe is blasting off atop a United Launch Alliance Delta IV Heavy, a huge, powerful, three-booster, three-stage rocket sure to light up a clear sky for hundreds of miles.

There is a 65-minute launch window Saturday morning, so if weather or some other factor causes a minor delay, the rocket’s launch could happen as late as 4:38 a.m. If there’s a launch scrub, the next window opens at 3:29 a.m. Sunday.

Weather forecasts are good for Saturday morning, with the U.S. Air Force’s 45th Weather Squadron based at Patrick Air Force Base saying there’s an 80 percent chance of favorable launch conditions.

There have been just 10 launches of Delta IV Heavy rockets since it debuted in 2004, the last going up from Cape Canaveral in 2014. United Launch Alliance has never had one fail, nor had a failure with any of its rockets in 129 consecutive launches. With the third stage added for this flight, the rocket stands 233 feet tall.

“I’m super excited. This is the first time that NASA is launching a Delta IV Heavy with a third stage and a science package on board,” said Omar Baez Jr., NASA launch director for the Parker Solar Probe mission. “We’ve launched other Delta IV Heavies, but not with science.”

This all began, as Fox pointed out, in the 1950s, when a young, obscure astrophysicist named Eugene Parker wrote a paper setting forth scientifically revolutionary theories about what goes on in the corona, and of solar winds and other phenomena originating there. His paper wasn’t well-received at first; in fact, it was largely trashed by peer reviewers as impossible. It went unpublished until a brave journal editor told Parker that while he personally didn’t accept Parker’s theories, he couldn’t find any flaws in Parker’s data and analysis, and so would publish his work. When that happened in 1958, Parker’s theories changed almost everything about how scientists view what goes on in the sun. 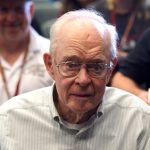 Parker, now a retired University of Chicago professor, is alive and well at age 91. This week he is at Kennedy Space Center to watch the launch of the space probe expected to send back data not just backing his theories but also helping scientists figure out many things about the sun’s dynamics that remain mysteries today.

When he arrived Thursday, Parker received a hero’s ovation from NASA officials and others awaiting him at a news conference.

This is the first time NASA has ever named a spacecraft after a living person.

“I was very flattered to hear about it. It took some time to get used to it. Now that some of the heat has come off I can get back to living a normal life,” the humble-sounding scientist told reporters at space center.

It’s not as if the phenomena that Parker first explained, and which the Parker Solar Probe will be exploring, don’t have critical, real-world impacts for earthlings. Those solar winds and the massive solar flares that blow out of the corona, sending forth powerful electro-magnetic waves, can have devastating effects on electronics on Earth, starting with knocking out satellite communications and power grid operations globally. With clearer understandings of what’s going on, scientists hope to be better able to predict the events and impacts, so that the world can better prepare for them.

The total cost of the Parker Solar Probe, including formulation, development, the rocket, the launch, and a seven-year prime mission operation, is expected to be, at most, about $1.548 billion, according to NASA.

The Parker spacecraft and the equipment aboard, weighing about 1,400 pounds, will be testing many of the latest state-of-the-art limits in technology.

The spacecraft will be flying through space at 430,000 mph, crushing the old record speed of about 175,000 mph for an early Mariner satellite.

At that rate the Parker Space Probe will first reach the corona along the edge of the sun in late November and spend about 12 Earth days skimming through that solar atmosphere before passing through and heading out to Venus. The craft will then loop back around Venus and head back to the sun for another solar encounter. It’s expected to make that round trip between Venus and the sun about three or four times a year, for a total of about 24 trips through the corona before the spacecraft uses up all its fuel.

“The way I like to think about it is that, hopefully, in a long, long period of time, 10 or 20 years, it will become a carbon disk floating around the sun. The carbon disk will be around until the end of the solar system,” said Andy Driesman, the project manager from Johns Hopkins.

The FIELDS instrument onboard will capture the scale and shape of electric and magnetic fields in the sun’s atmosphere. The SCM device will measure how the magnetic field changes over time. Two instruments, the SWEAP and the Solar Probe Cup, count the most abundant particles in the solar wind — electrons, protons and helium ions — and measure such properties as velocity, density, and temperature to improve understanding of the solar wind and coronal plasma. The ISʘIS instrument will measure electrons, protons and ions across a wide range of energies to provide insight into the particles’ lifecycles — where they came from, how they became accelerated and how they move out from the sun through interplanetary space. The EPI-Lo device measures the spectra of electrons and ions and identifies carbon, oxygen, neon, magnesium, silicon, iron and two isotopes of helium.

The probe’s leading edge is an umbrella-like heat shield made of a carbon-carbon composite able to withstand that temperature. The shield took more than a decade to develop and 18 months to manufacture, Driesman said. Because the plasma atmosphere of the corona is so thin, there is very little heat transfer, so it won’t be as if the heat shield will get so hot that it will in turn heat up the instruments it is protecting.

Most of those instruments aboard will remain pretty cool — at temperatures that are normal on Earth.

Nonetheless, some devices will catch some heat. They are made of sophisticated alloys, such as titanium-zirconium-molybdenum, which can withstand temperatures of thousands of degrees. The solar arrays that will generate power have active cooling systems inside them.