Whether you call him Baby Yoda or his “official” names (Grogu and The Child), the breakout character of “The Mandalorian” will soon be appearing around Star Wars: Galaxy’s Edge at Disneyland.

The announcement was made Friday during a panel at the Star Wars Celebration convention in Anaheim. According to a post on the official Disney Parks Blog, Baby Yoda and Din Djarin, also known as the Mandalorian, will appear at Galaxy’s Edge “at a later date.” Starting May 28, Boba Fett and Fennec Shand, characters from both “The Mandalorian” and “The Book of Boba Fett,” will be seen around the land. 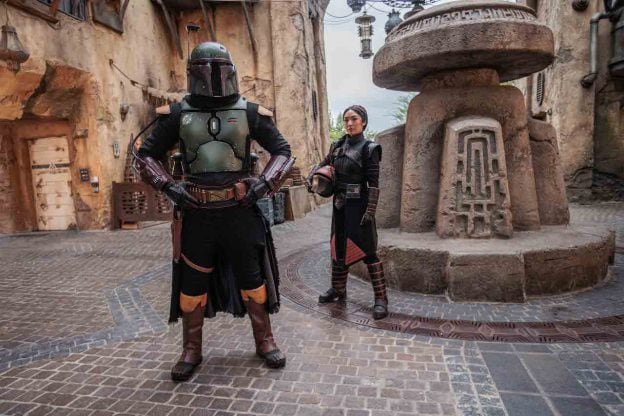 This is a major shift for the setting of Black Spire Outpost on the planet Baatu. Since it debuted in 2019, the land has been firmly set in the era of the “Star Wars” sequels – which take place at least two decades after the events of “The Mandalorian.”

Scott Trowbridge, the Disney Imagineer who served as the creative lead for Galaxy’s Edge, said in the Parks Blog post that Disney is now “expanding the stories guests can encounter when visiting” the land. But he also cautioned that this won’t result in continuity-shattering encounters between characters from different eras.

“While we as visitors may be able to experience different stories throughout Star Wars history, the characters on Batuu can not,” Trowbridge wrote. “They will remain in their specific story and timeline and won’t intersect with other characters or stories that would not be appropriate for them.”

A vocal minority of “Star Wars” fans have criticized Galaxy’s Edge for focusing on the sequel trilogy. On the other hand, those films also grossed $4.4 billion worldwide.

Disney did take a different approach to its next major land, Avengers Campus, which has featured characters from across the Marvel Cinematic Universe without adhering to a strict continuity. This has allowed Disney to synergistically feature new Marvel characters at Disneyland as soon as they’re featured in movies and TV shows.

For now, the changes to Galaxy’s Edge only apply to the Disneyland version of the land. There’s no word on if or when the same characters will be introduced at Walt Disney World.