You can get your closest look ever at Super Nintendo World at Universal Studios Japan in its latest Nintendo Direct.

Nintendo toured the land ahead of its Feb. 4, 2021 opening with Mario creator Shigeru Miyamoto himself acting as guide. Along the way, he gave a lot more details about the area’s entrance, interactive elements, food and even a peek at its merchandise.

Here are five important takeaways from the tour.

1. An entrance straight out of Super Mario 64

It was no secret that the entrance to Super Nintendo World would, appropriately, be through a warp pipe. Miyamoto called it a “straightfoward” design, though the pipe’s walls do feature LED lights to give you a feeling of being transported. 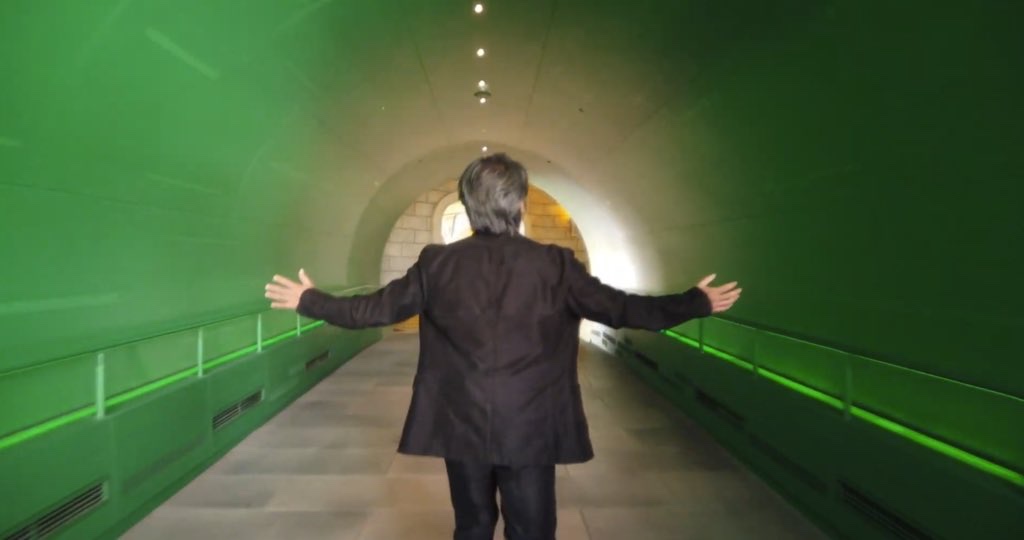 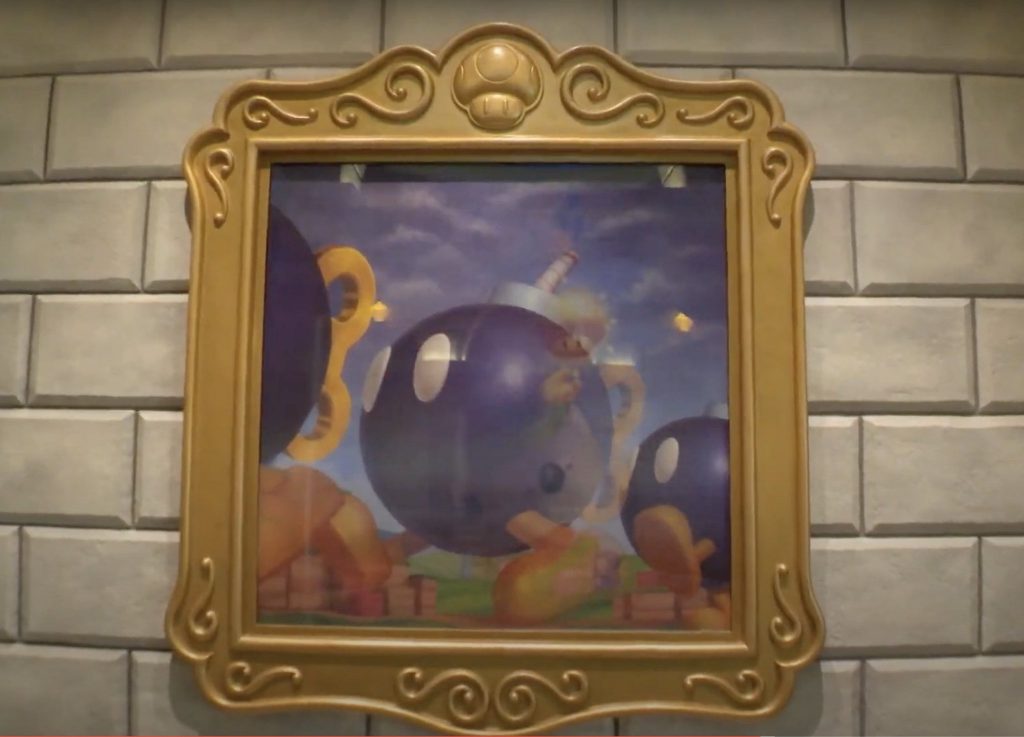 Out of the warp pipe, guests will enter into Peach’s Castle — and fans of Super Mario 64 should quickly feel at home. You’ll be greeted by the familiar castle theme from the 1996 game and even pass by the same paintings that were used in the game to enter different levels (though we wouldn’t recommend jumping at them in real life).

2. How to use your Power-Up Band

The land’s use of interactive wristbands was also no secret, but Miyamoto showed off the extent of the gameplay elements through Super Nintendo World. Using your Power-Up Band, you can collect digital coins by punching your band onto question mark boxes, and set off different elements to receive special “key coins.” If you collect three such coins, you can then experience a special boss battle with Bowser Jr. 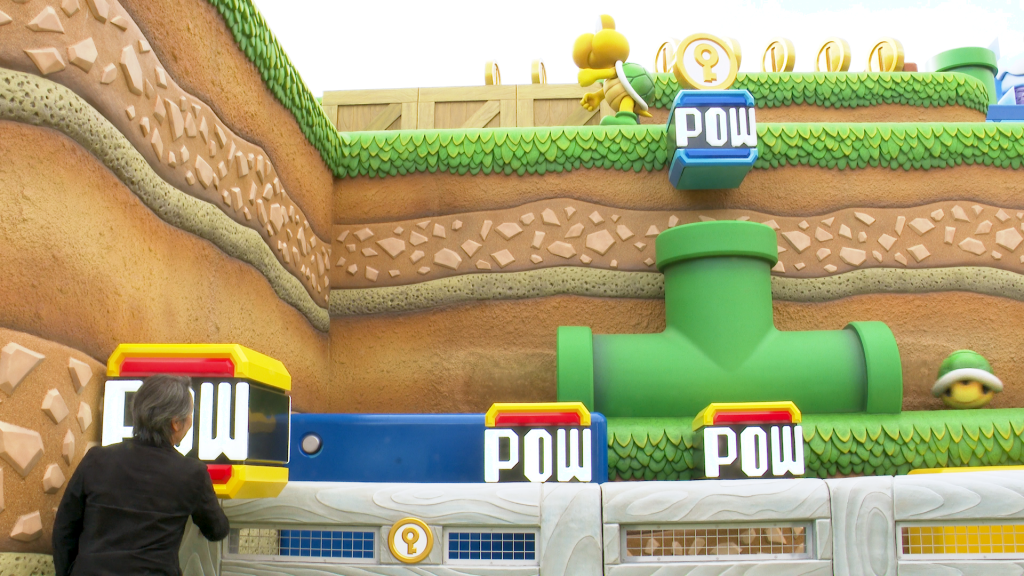 Miyamoto made it clear there were more of these activities throughout the land then he showed off in the video, such as one involving a sleeping Piranha Plant.

Something completely new for the tour was the underground area of the land. With the setting taken straight from the classic NES games (you can probably hear the theme to it in your head right now), guests will find more interactive elements — both obvious question mark boxes and secret touchpoints for your Power-Up Band — and enemies like Bob-ombs. 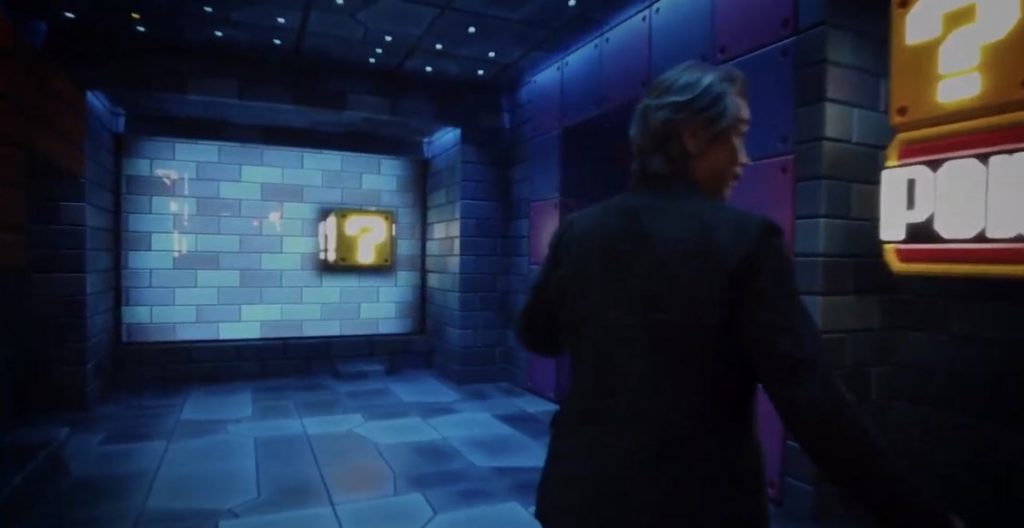 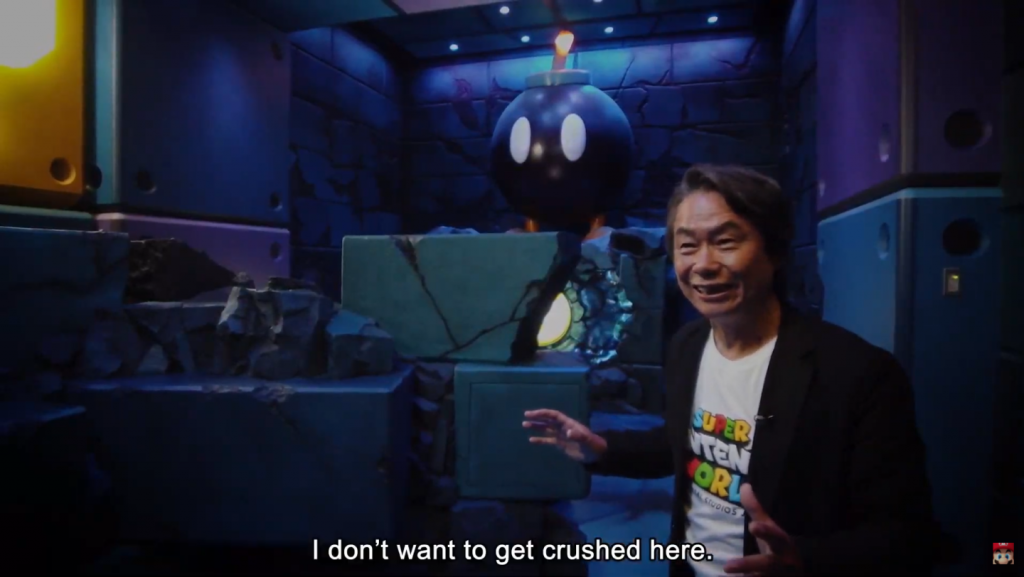 At one point, the Bob-ombs “exploded” and the scenery used an optical illusion to make Miyamoto feel like he was smaller, as if Mario had been shrunken to his miniature version in the game.

The tour also offered the first glimpse into the land’s main dining location. Called Kinopio’s Cafe, after the Japanese name for the character that Americans know as Toad, the restaurant is housed in a mushroom building. Video screens show off the “kitchen” with Toad and others working. 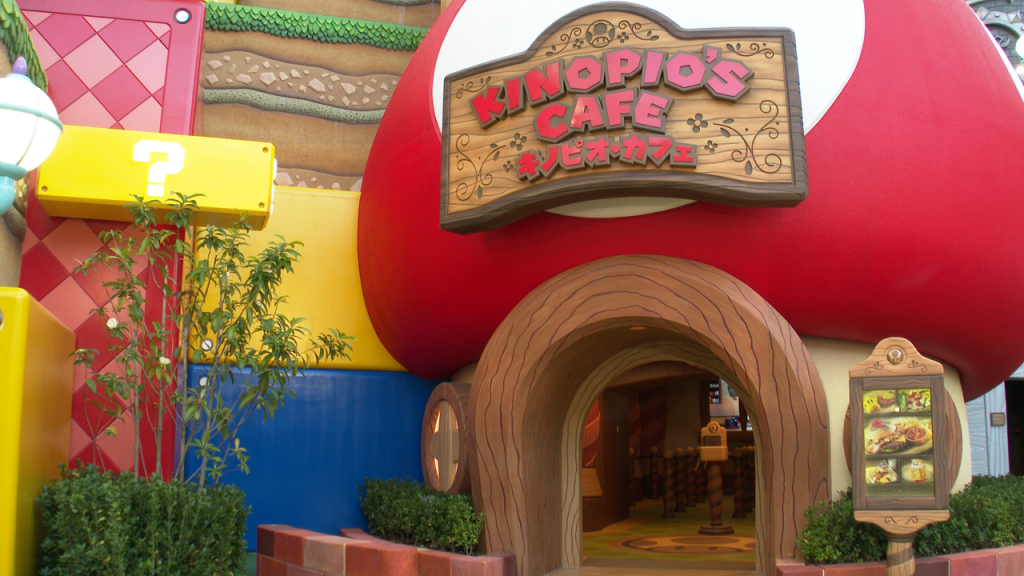 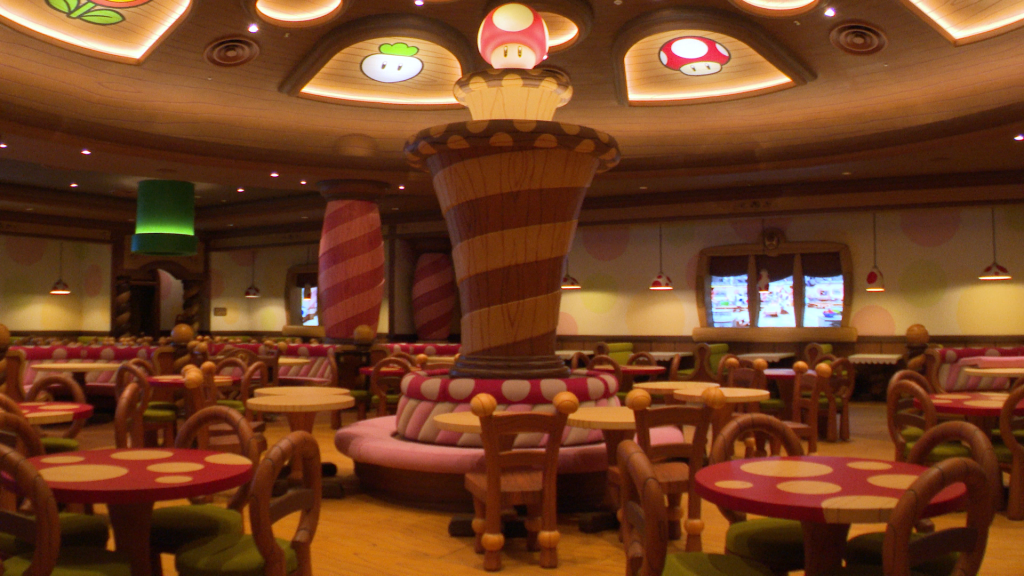 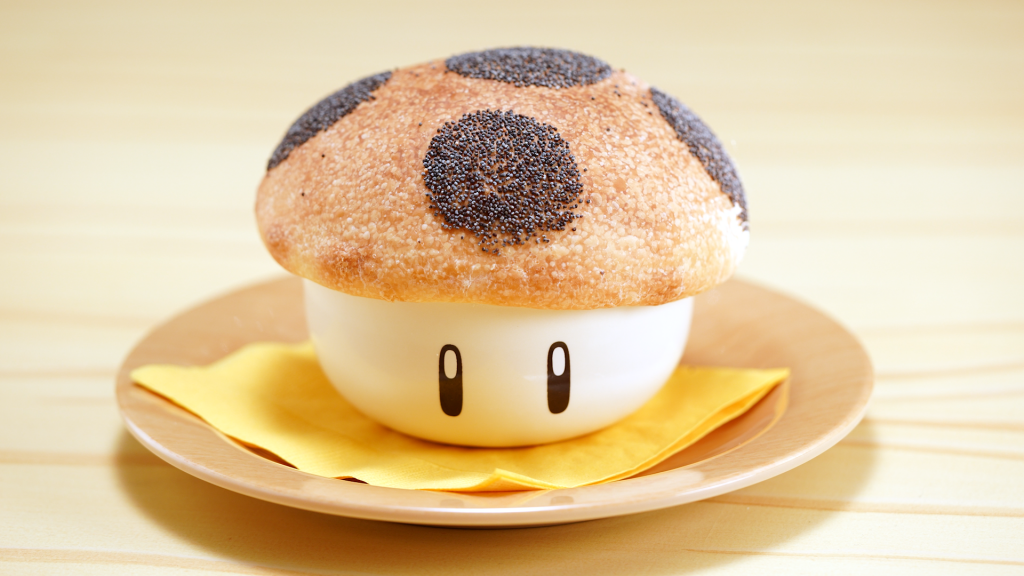 Entrees include mushroom dishes (does that count as cannibalism for Toad?) such as the Super Mushroom Pizza Bowl and the Mario Bacon and Mushroom Burger.

“I hope you can all eat here and power up!” Miyamoto said. 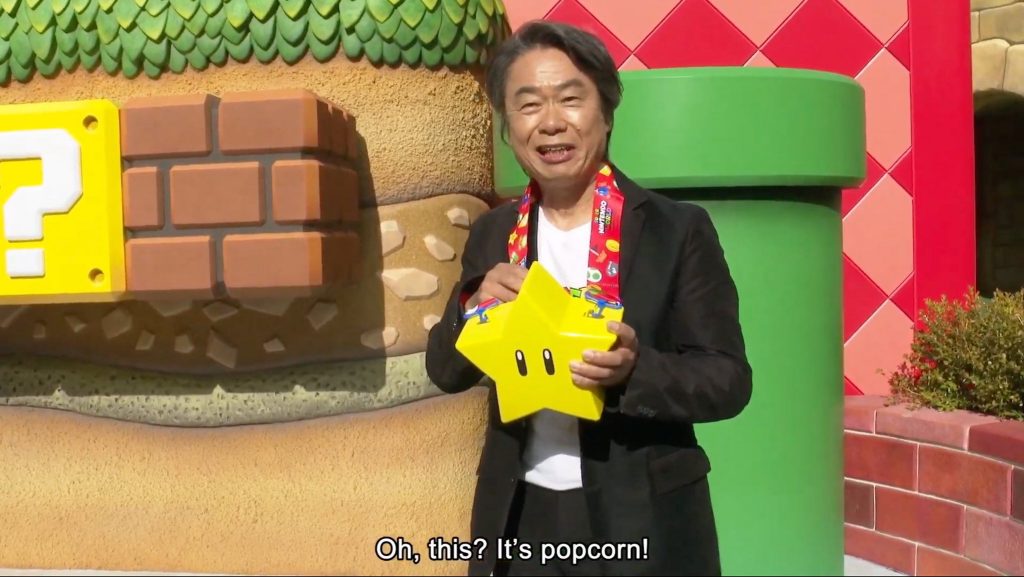 Outside the cafe, the land will also offer various popcorn flavors, including mushroom and “caramel peach.”

Miyamoto also showed off a bit of the land’s gift shop. Called the 1Up Factory, you’ll find plenty of Mario and Luigi shirts, hats, and plush inside, along with an exclusive walking Mario toy called Tokotoko Mario designed by Nintendo. 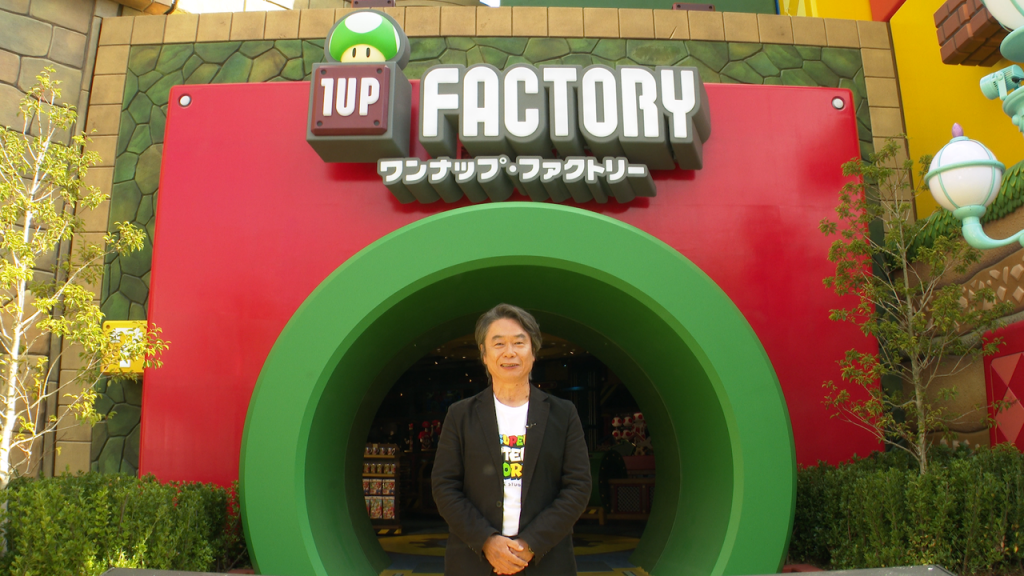 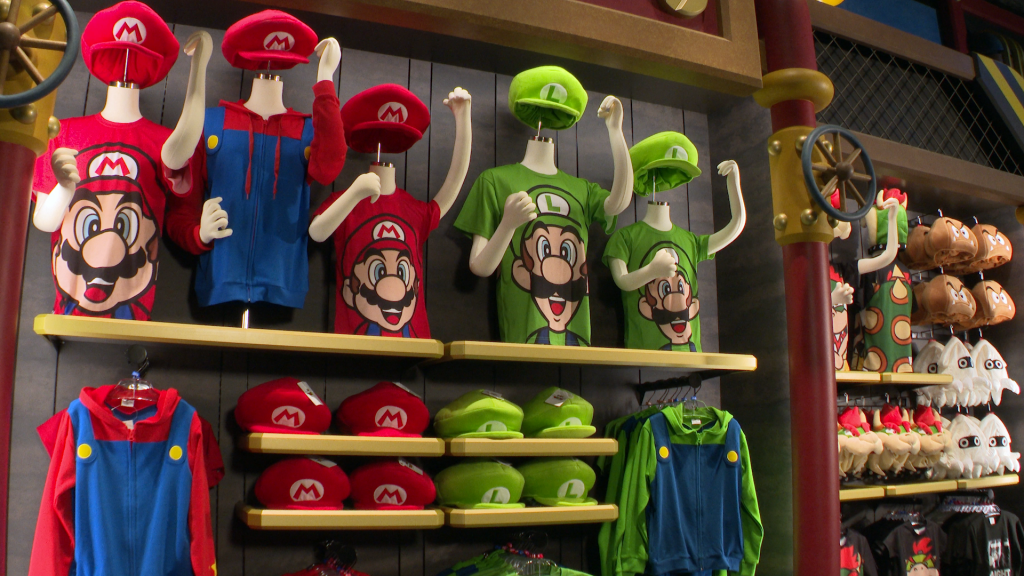 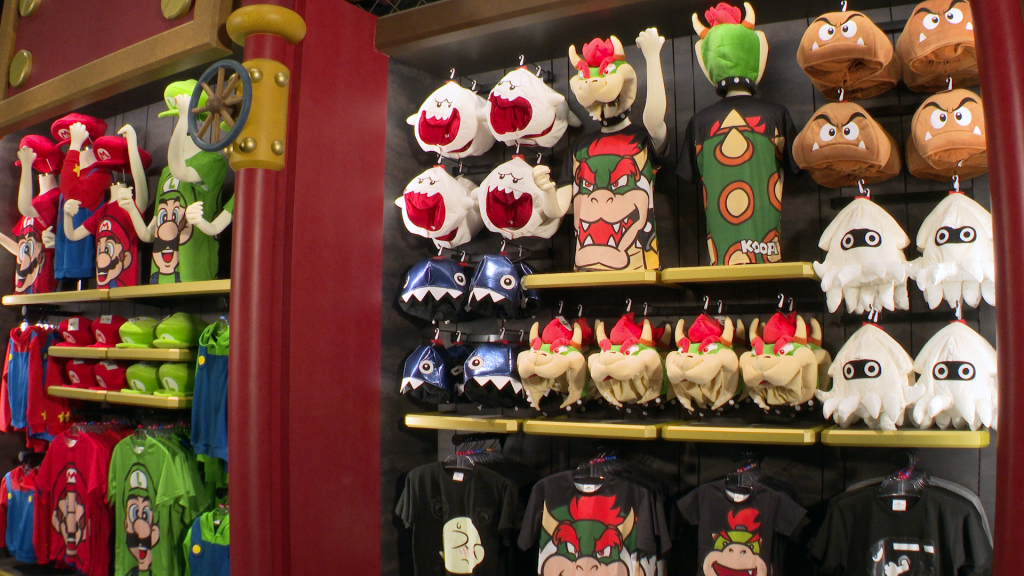 Near the end of the video, Miyamoto acknowledged that fans outside Japan won’t be able to visit the land when it opens due to COVID-19 restrictions, but reiterated that versions of Super Nintendo World are planning for Universal parks in Hollywood, Orlando and Singapore.