Notices filed with the state of Florida have put a final tally on the number of Disney World workers who have lost their jobs as part of massive layoffs within Disney’s theme park division.

In an Oct. 29 notice, Disney disclosed that 11,350 unionized employees for Disney World will be laid off on Dec. 31, 2020. 10,903 were cast members who worked within the resort proper, but the layoffs also affected employees at Disney’s Maingate office complex in Kissimmee, Orlando International Airport, and even one worker at the Disney Reservation Center in Tampa. 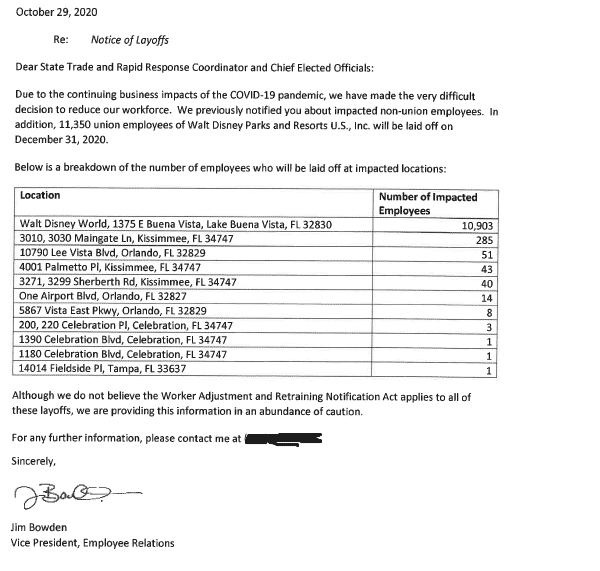 Coupled with the previously announced layoffs of 6,700 non-unionized employees, that means a total of 18,050 Disney employees in Central Florida will be out of work.

Disney had announced a total of 28,000 layoffs throughout its theme park division at the end of September. While Disney parks chief Josh D’Amaro partially blamed the state of California’s “unwillingness to lift restrictions that would allow Disneyland to reopen” for the cutbacks, Disneyland is absorbing fewer layoffs in terms of raw numbers. The Los Angeles Times reported that 10,000 Disneyland workers are expected to lose their jobs, with email notifications expected to reach employees by Sunday.

Despite the mass layoffs, Disney reportedly restored full pay to thousands of its executives in late August.