The Magic Kingdom custodians each make $10.55 an hour after working for the theme park 13 years. He works as a landscaper on this days off to make enough extra money to cover their bills.

“They (Disney) want to keep all the money for themselves,” said Jose Santiago, 56. “A little raise would not put a hole in their pocket.”

The couple joined more than 1,000 Disney union workers at “Rally for a Raise” Thursday night to persuade Walt Disney World to agree to an accelerated increase from $10 to $15.71 an hour.

The Service Trades Council Union, which represents 38,000 employees, sponsored the rally at the Crossroads entrance to Walt Disney World. Some employees arrived after work still wearing their Disney uniforms. Others wore bright red Unite Here T-shirts at the biggest rally since the six unions began negotiating with Disney last August.

The Services Council, which includes six local unions, is asking for the first raise since 2014 when the theme park raised the starting pay from $8.03 to $10.00 per hour. Their next negotiation session is scheduled for Tuesday.

Disney union workers lined both sides of State Road 535 at Hotel Plaza Boulevard holding picket signs and chanting slogans, like, “Disney workers need a raise” and We eat, we sweat, we need a raise to pay the rent.”

Disney has stated that they will offer a “fair and equitable” wage. Their initial offer was for a 25-cent raise and that was raised to 30 cents an hour after the first negotiation session.

Rollin Smith, a Disney bus driver, said many new workers make more than Disney employees who started at the company years ago.

“The proposed Disney raise would be eaten up by a future healthcare increase, so it’s not a raise at all,” said Smith, 67.

Mercedes McEnroe, a server at Be Our Guest Restaurant, said she makes $11.43 and hour and has worked at Disney since 1982. She said she makes no tips but Disney receives tips from guests “that all go back to Mickey Mouse.”

“I told my three kids, don’t you dare ever work for Walt Disney World,” said McEnroe, 55.

Despite the low pay, Jose and Nancy Santiago said they plan to keep working at Disney for the health benefits. The couple said at their age, they have no choice but to stay until retirement. 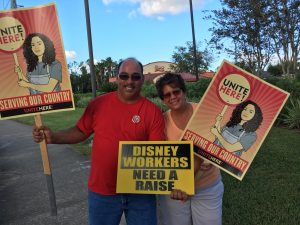